This program was part of a “Washington Journal” series from December 18-25 featuring top authors of 2016. 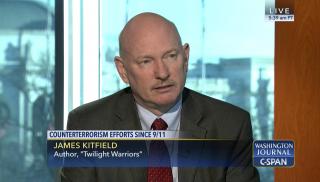