Chief White House Counselor Stephen Bannon said he wants to “destroy” the establishment and bring the state “crashing down.” He’s off to a good start. 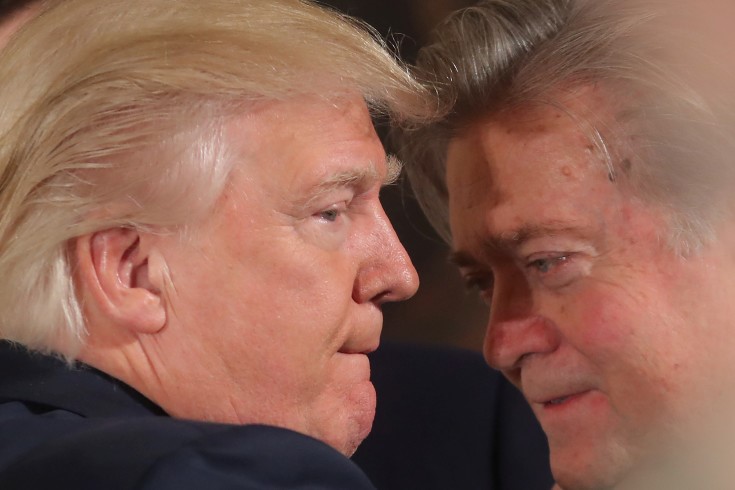 This article was originally published on the Vocativ website.

There has been sound and, yes, fury, as Trump administration officials has struggled to regain their footing tn the face of a withering backlash against the White House’s recent order to temporarily ban migrants from seven Muslim-majority countries. There were spontaneous demonstrations at airports across the country, the recent decision by a federal appeal’s court to stay the ban, and international condemnation from stalwart U.S. allies. Trump fired acting attorney general Sally Yates for refusing to defend the executive order in court, and warned more than 1,000 State Department officials who signed a draft formal protest that they should quit or embrace the president’s agenda. Trump lambasted the “so called” judge who initially issued the stay, and called the appeals court deliberations that ultimately upheld the lower court below even a “bad high school student.” There was even celebration from Jihadist groups who pointed to the new policy as proof positive of their claim of a war between the United States and Islam. Islamic State websites referred to the executive order as “The Blessed Ban.”

Reacting to the worldwide condemnation and a potential constitutional crisis that now seems headed to the Supreme Court, President Trump responded in a Friday tweet that the the federal appeals court had reached “a disgraceful decision!”

Somewhat overshadowed in all the hoopla was another presidential decree issued in the last week that may well institutionalize such mayhem as the “new normal” in the Trump era. That directive gave chief White House political strategist Stephen Bannon — the anti-globalist lightning rod who as executive chairman turned Breitbart News into the preferred media platform for the white nationalist, anti-globalist “alt-right” movement — a formal position on the National Security Council’s powerful principals committee. The most powerful decision-making body in government, the principals committee is where matters of war and peace are debated. It is chaired by the president and consists primarily of the heads of the national security departments and agencies such as the Secretaries of Defense, State, Homeland Defense and Treasury, along with the National Security Adviser.

The same NSC reshuffling memo also suggested that the director of national intelligence and the chairman of the Joint Chiefs of Staff shall attend principals meetings only when the issues to be discussed touched directly on their “responsibilities and expertise.” Taken as a whole, the NSC memo was widely interpreted as downgrading the input of the nation’s most experienced intelligence and military officials, and elevating the provocateur behind many of Trump’s most controversial positions and policies, including the hastily implemented immigrant ban.

“Very strange bureaucratic decision by the President. What possible purpose is served by excluding the most senior military and intelligence officers from any discussions on national security?” General Barry McCaffrey, (ret.), a decorated combat veteran and former 4-star commander of U.S. Southern Command, wrote in an email. “Do they fear opposition to ongoing policy discussions and positions, such as the immigration ban, rejection of NATO, confrontation with Mexico, or return to torture? This is an extremely bad decision with very dangerous potential implications. Congress should confront the President over this strange call, and I wouldn’t be surprised Chairman of the Joint Chiefs [General Joseph] Dunford considers resigning over it. ”

As the only president who has never previously served in either government or the military, Trump is still largely an enigma. The election victory immediately raised the question of whether Trump — a successful real estate developer and reality-TV star who ran one of the most controversial and unorthodox campaigns in modern U.S. history — could translate his formidable campaigning skills to the more consequential task of governing. Trump’s first two weeks in office offered an inauspicious beginning. President Trump’s initial foray was filled with Twitter feuds, bald fabrications on issues as trivial as the size of his inauguration crowd and popular vote deficit, and a doubling down on controversial policy proposals such as humiliating Mexico by making it pay for a U.S. border wall.

The rapid ascendance of Bannon and his increasingly symbiotic relationship with the new commander-in-chief has crystalized concerns that his populist and anti-globalist ideology will become the lodestar by which Trump charts his national security policies. Bannon’s growing influence in foreign policy within the administration was evident in photos that showed him in the Oval Office as Trump spoke on the phone with several world leaders, including Russia’s Vladimir Putin.

According to the Wall Street Journal, Bannon and senior White House adviser Stephen Miller, a former press aide for Senator Jeff Sessions, R-Ala., the new attorney general with his own checkered history on issues of race and immigration, wrote Trump’s dark, “American carnage” inauguration speech. In it the leader of the free world promised to follow only an “America First” foreign policy whose nomenclature traces back to American isolationists and fascist apologists of the 1930s, sending shudders through the councils of U.S. allies.

Last week Bannon also echoed his boss by declaring open war on the media, saying in an interview that it “should be embarrassed and humiliated and keep its mouth shut and just listen for a while.” Bannon went on, “I want you to quote me on this. The media here is the opposition party.”

As the former chairman of Breitbart News, Bannon also embraced ultra-nationalist, anti-immigrant parties in Europe that advocate for the breakup of the European Union and in many cases oppose the NATO alliance. Many of those parties also have close ties with Russian President Vladimir Putin, who in some cases has helped bankroll their campaigns. Those connections raise concerns that Bannon is at least partly behind Trump’s strange affinity for the Russian leader, who U.S. intelligence agencies believe interfered in the U.S. election in order to help get the real estate developer elected.

According to numerous media reports, Bannon was also behind the slapdash execution of the presidential order temporarily banning refugees and visa-holders from seven Muslim-majority countries, before Trump’s cabinet was even in place and the Departments of State and Homeland Security could be adequately briefed and prepared. Making a political adviser like Bannon a formal member of the NSC principles committee, on a par with cabinet secretaries and four-star generals, even while suggesting that the participation of the nation’s chief intelligence official and senior military officer was less than mandatory, was simply without precedent.

This is stone cold crazy. After a week of crazy. Who needs military advice or intell to make policy on ISIL, Syria, Afghanistan, DPRK?

“Stone cold crazy” is how outgoing national security adviser Susan Rice described the move in a Tweet. “Chairman of Joint Chiefs and DNI treated as after thoughts in Cabinet-level principals meetings. And where is CIA?? Cut out of everything?” On CBS’ Sunday news show “Face the Nation,” Senator John McCain, R-Az., chairman of the Armed Services Committee, said “I am worried about the National Security Council — who are the members of it and who are the permanent members of it? The appointment of Mr. Bannon is something which is a radical departure from any National Security Council in history.”

No Benefit of the Doubt

At a press conference, White House spokesman Sean Spicer correctly noted that the language of the presidential directive reshuffling the NSC, at least in terms of describing the participation of the chairman of the Joint Chiefs and the director of National Intelligence in principals meetings, was almost identical to that used by the George W. Bush administration. A White House press corps that has been repeatedly been called “the opposition” by the administration, and has spent two weeks trying to substantiate a string of Trump fabrications, seemed disinclined to give Spicer the benefit of the doubt.

The substantive difference between the Bush and Trump NSC policies is that Bush enforced a hard line between the White House political operations and its national security deliberations, barring his senior political adviser Karl Rove from NSC meetings. President Obama allowed his senior political adviser David Axelrod to attend some NSC meetings on important issues such as troop levels in Afghanistan, but did not make him a formal participant. Even so, Obama was roundly criticized by Republicans for politicizing NSC deliberations on matters of national security.

“Making a political strategist like Stephen Bannon a regular participant at principals meetings is unusual and new, but it’s really an extension of Obama’s letting a political adviser like Axelrod even attend those meetings,” said Peter Feaver, who served on Bush 43’s National Security Council, and directs the Program on American Grand Strategy at Duke University. “I think President Bush was right to keep the political and national security processes separate, and it certainly made for better optics. I criticized President Obama for blurring those lines, and now President Trump has opened his administration up to the same criticisms.”

Kori Schake also served on the Bush administration’s National Security Council, and is currently a research fellow at the Hoover Institution think tank. She recently co-authored the report “Process Makes Perfect: Best Practices in the Art of National Security Policymaking.” While Obama may have opened the door by letting a political adviser attend principals meetings, she noted, Trump’s new NSC directive flings it wide open.

“Trump criticized Obama as having the worst national security policies, but a big reason those policies were not more successful on issues like Afghanistan and Iraq was because military advice was too often marginalized,” Schake said in an interview. “Now with this new NSC directive, Trump has opened himself up to the same criticism. In practice, it may not impact deliberations all that much, but the signal it clearly sends is that we’re increasing the role of political operatives in national security decision-making, and diminishing the role of the professionals in intelligence and the military who have the expertise to keep the nation safe.”

“Process Makes Perfect” stresses the point that few presidents enter the Oval Office having thought hard about how to make the cogs in the vast federal bureaucracy respond smoothly and in unison to the will of the chief executive. To differing degrees each commander-in-chief learns on the job, and they have to fashion a decision-making process that suits their individual personality, instincts and worldview. Given President Donald Trump’s penchant for disruption and controversy and disdain for the status quo, and Stephen Bannon’s dark ideological underpinnings, the report’s most important conclusion – supplied by Stephen Hadley, Bush 43’s national security adviser, is reason enough for concern: “Presidents get the national security process they deserve.”