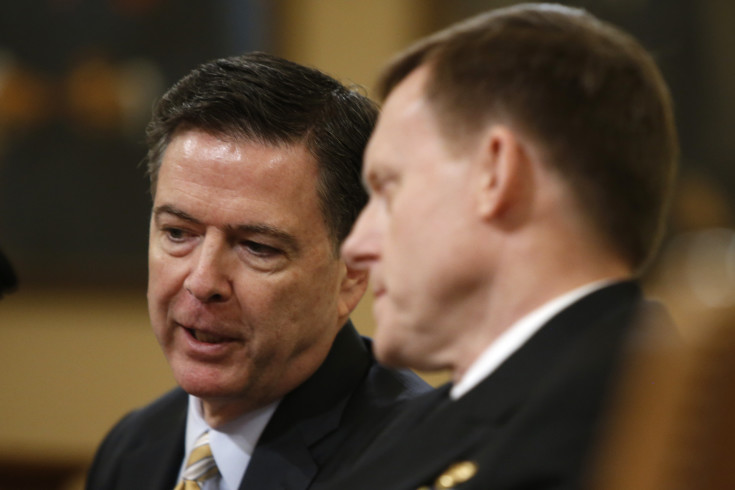 Not since establishment of the Select Committee on Presidential Campaign Activities in February of 1973 has Washington, D.C. witnessed a Capitol Hill hearing quite like this. On Monday FBI Director James Comey and NSA director Admiral Michael Rogers testified before the House Intelligence Committee, and four decades after Watergate another newly-elected president finds himself embroiled in a controversy that threatens to derail his administration’s fledgling agenda. Once again the nation’s capital is transfixed by charges of illegal wiretapping, a campaign break-in to steal the files of the Democratic opposition, and the leaking to the press of classified information by senior government officials.

Of course, not every new Washington scandal equates to another Watergate, and it’s possible that the many smoke-trails of suspicion floated during Monday’s hearing will simply fade. But what has already been acknowledged in just the Trump administration’s first two months in office, when most administrations are still sailing with election winds at their backs, is extraordinary.

Both Comey and Rogers reiterated the conclusion of the U.S. Intelligence Community that the Russians hacked the Democratic National Committee and Hillary Clinton’s campaign in order to help elect Donald Trump. They confirmed ongoing investigations into possible coordination between the Russians and Trump campaign officials, and of leaks by U.S. government officials of intercepted communications by Trump officials. Both Comey and Rogers also rebutted the president’s sensational charge that President Barack Obama illegally wire-tapped Trump’s communications, saying they had seen no evidence to back the accusation.

Even President Trump has noted the echoes of the defining Washington scandal that brought down former President Richard Nixon. “How low has President Obama gone to tapp (sic) my phones during the very sacred election process,” Trump tweeted two weeks ago. “This is Nixon/Watergate. Bad (or sick) guy!

Just in recent days Trump has double-downed on his unsubstantiated claims that the Obama administration illegally tapped his communications during the election, going so far as to drag two of the United States’ closest allies into the dispute. On Friday Trump used a joint appearance at the White House with German Chancellor Angela Merkel to restate the charge, picking at the wound inflicted in 2013 when it was revealed that the Obama administration’s NSA secretly listened in on her cell phone conversations.

“As far as wiretapping by this past administration, at least we have something in common, perhaps,” Trump said at the joint press conference, as a clearly displeased Merkel did a double-take at the comment. Trump also refused to back off the claim repeated by his spokesman Sean Spicer that a British spy agency spied on Trump at Obama’s behest. In an unusually public reaction, the normally reclusive British spy agency called the charge “ridiculous” and “nonsense,” and the British government demanded the White House stop repeating it.

At Monday’s hearing, Comey and Rogers added their names to a growing list of U.S. officials and Republican leaders who say there is no evidence to back Trump’s claims. That lists now includes the chairman and ranking members of the Senate and House Intelligence Committees, Republican Speaker of the House Paul Ryan, R-Wis., and Senate Majority Leader Mitch McConnell, R-Kentucky, and even Trump’s Attorney General Jeff Sessions.

“With respect to the president’s Tweets about alleged wiretapping directed at him by the prior administration, I have no information that supports those tweets, and we have looked carefully inside the FBI,” Comey testified. “The Department of Justice has asked me to share with you that the answer is the same for the Department and all its components.”

For their part, Republicans on the House Intelligence Committee stressed that neither have U.S. officials pointed to any evidence of collusion between the Trump campaign and Russian officials involved in the hacking of Democratic officials’ emails. Both former Director of National Intelligence James Clapper, and former acting CIA chief Michael Morrell, have denied seeing any evidence of such collusion. Because the FBI has an ongoing investigation of contacts between various Trump campaign officials and the Russians, Comey repeatedly declined to answer questions on the matter.

That did not stop President Trump from noting the lack of evidence of collusion. “The Democrats made up and pushed the Russian story as an excuse for running a terrible campaign,” Trump tweeted Monday. “Big advantage in Electoral College & lost!”

Rep. Adam Schiff, D-CA., ranking Democrat on the Intelligence Committee, laid out “circumstantial evidence” on such collusion based on the meetings and ties between Russian officials and Trump campaign aides and advisers, to include former campaign manager Paul Manafort, former foreign policy advisor Carter Page, and Trump long-time confidante Roger Stone. He also cited direct evidence of “deception” by both former Trump National Security Adviser Michael Flynn and Attorney General Sessions. Flynn resigned, and Sessions recused himself from any investigations of Trump’s campaign, after both mischaracterized their discussions with the Russian ambassador to the United States, Sergey Kislyak.

“We know that the months of July and August of 2016 were pivotal, because that’s when the Russians began using the information they had stolen from the Democrats to help Trump and harm Hillary Clinton. Why?” said Schiff during today’s hearing. “What was happening in July and August of last year, and were U.S. citizens involved?”

Even if no evidence of collusion between the campaign and Russia is discovered, many experts believe a thorough investigation is warranted in order to deter future Russian meddling. “I’m not convinced that there is anything to suspicions of collusion, but the defensiveness of Trump officials is not helpful,” said Steven Pifer, a senior fellow at the Brookings Institution’s Center for 21st Century Security and Intelligence. “More importantly, a thorough investigation is needed because the Russians succeeded in undermining confidence in our electoral system, and the issue has certainly wrong-footed President Trump in his first couple of months in office. And if we don’t figure out exactly what Moscow did and how to counter it, we can expect them to do it again in 2020, when Trump might be on the wrong side of their efforts.”

Republican committee members were more focused on leaks to the press of classified U.S. intelligence, presumably by high-ranking U.S. officials. They focused particularly on a phone call between Kislyak and Flynn in late December, in which U.S. sanctions on Russia for its annexation of Crimea and meddling in Ukraine were discussed. After Flynn assured Vice President Mike Pence that sanctions were not discussed during that call, someone with knowledge of the transcript of that intercepted conversation leaked the discrepancy to the press, leading to Flynn’s resignation.

“Today’s hearing was important because it raised three very consequential issues,” said Adam Klein, a senior fellow at the Center for a New American Security. Because there’s still an ongoing investigation, he noted, the hearing was least conclusive about how the Russians meddled in the U.S. election, and whether there was any coordination with Trump campaign officials. “On the issue of whether there was improper surveillance of the Trump campaign, Comey said that the FBI and Department of Justice have no information to support the President’s tweets,” he said. “Third, the Republicans on the committee rightfully highlighted that the leaking of the Flynn conversation with Kislyak was a major breach of the policies governing U.S. intelligence collection, and Congress may need to investigate whether the safeguards against disclosing the identities of U.S. citizens are stringent enough.”

Perhaps the biggest surprise of Monday’s hearing was that it offered something rarely seen in Washington of late – a serious and bipartisan example of Congressional oversight, unsullied by rancor or grandstanding. “I was actually encouraged by the bipartisanship of the House Intelligence Committee, which was reminiscent of the 9/11 Commission in many ways,” said Klein. “Democrats were understandably focused on Russian interference in the election, and Republicans emphasized government leaks, and those are both important issues. And both the chairman and ranking minority member were united in responding to the President’s allegations of being wiretapped. That’s what bipartisan Congressional oversight is supposed to look like.”

If at some point the bipartisan consensus on Capitol Hill that now overwhelmingly rejects President Trump’s claims of wiretapping of his communications coalesces around charges of collusion between the Trump campaign and Russia, the White House should be very afraid. As Richard Nixon discovered at the apex of the original Watergate scandal, that’s what it looks like just before the fall.