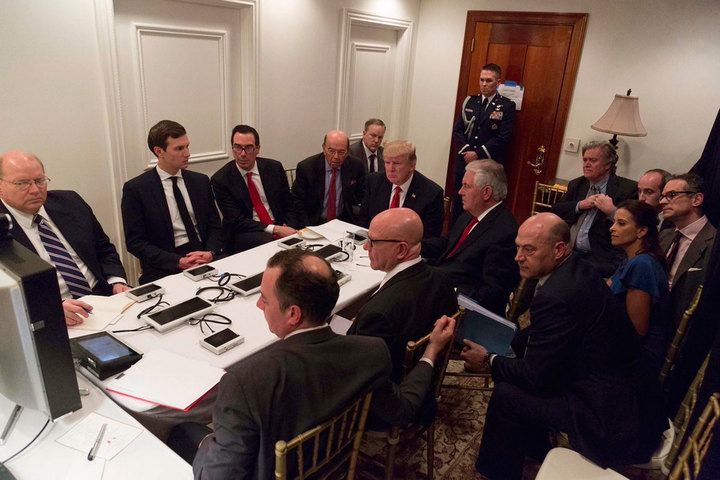 There would be no long, anxious walks in the Rose Garden this time, no throwing the decision to Congress or fudging a red line that had been clearly drawn. Just hours after accusing Syrian dictator Bashar Assad of going “beyond a red line” with a poison gas attack that killed scores of civilians, President Trump ordered a cruise missile strike against the Syrian air base from which the attack was launched.

Announcing the first U.S. military action against the Assad regime, Trump also stayed uncharacteristically on script, solemnly asking for “God’s wisdom as we face the challenge of our very troubled world. We pray for the lives of the wounded and for the souls of those who have passed, and we hope that as long as America stands for justice, then peace and harmony will, in the end, prevail,” said Trump, employing decidedly un-Trumplike rhetoric.

In confronting its first real crisis after months of self-inflicted wounds, the Trump administration also received uncharacteristic support and even praise from allies around the world, including the leaders of Germany, France, Great Britain, Canada, Turkey, Saudi Arabia and Israel. Some Republicans even predicted the strikes might represent an important turning point for a commander-in-chief who has been beset by controversy and saddled with abysmal public-approval ratings.

“This military action is quite dramatic, because for four years countries such as Russia, China, North Korea, Iran and Syria have trampled on international agreements and norms, and now Trump is signaling a shift away from the Obama doctrine [of restraint] and toward a more Reaganesque foreign policy,” said former Ambassador James Jeffrey, a distinguished fellow at the Washington Institute for Near East Policy, former U.S. ambassador to Turkey and Iraq, and deputy national security adviser in the George W. Bush administration. The administration’s action not only enjoys wide international support, he noted, but also has firm legal justifications in United Nations resolutions and the Chemical Weapons Convention. (Jeffrey’s view appears to be in the minority among legal experts, many of whom question the basis in domestic and international law for Trump’s actions.) “And I commend them for acting quickly and competently, because if you hesitate too long on issues like this, you end up with a walk in the Rose Garden and indecision.”

To understand why Trump’s actions were so well-received by conservatives, it’s important to note that in striking out against Syrian atrocities, Trump distanced himself not only from his own numerous past comments and tweets advising against that very action but also from a low point for his predecessor, Barack Obama. In what many experts view as a pivotal moment in his presidency, Obama famously took an hourlong walk on the South Lawn of the White House with his chief of staff, Denis McDonough, in late August 2013, and then at the last minute backed away from enforcing his own “red line” against Assad’s use of chemical weapons in an attack that killed more than 1,400 civilians. Instead, Obama sought an authorization from Congress, which failed to act, and settled for an agreement for Assad to destroy his chemical weapon stocks, under Russian supervision. Whether you believe that decision flowed from prudence or excessive caution, even many senior Obama officials believe it delivered a severe blow to U.S. credibility.

“I do believe President Obama underestimated the damage that drawing a red line and failing to enforce it would do,” said Ivo Daalder, president of the Chicago Council on Global Affairs, and the former U.S. ambassador to NATO in the Obama administration. “The reality is that many allies in the Middle East and elsewhere began distrusting the United States’ word after that. Our ability to manage the liberal international order depends on people having trust and confidence in our word, and that was undermined.”

But there was significant risk even in the Trump administration’s relatively limited attack, which dispatched 59 cruise missiles to hit a single Syrian air base, with a reported loss of six Syrian lives and the destruction, according to Secretary of State Rex Tillerson, of 20 percent of the Seventh Wing of the Syrian air force. (News reports indicated that the base was back in at least partial operation by Friday.)

Syria’s ally, Russia, has strongly condemned the strikes as an unwarranted and illegal attack on a sovereign nation. Moscow initially threatened to jettison a “de-confliction” communications channel that creates a safety buffer between U.S. and Russian military aircraft operating in the Syrian civil war theater — a move that would have represented a dangerous escalation between two nuclear weapons superpowers operating in a single, congested battle space. Russia later backed off that threat. At an emergency meeting of the U.N. Security Council on Friday, the Russian representative nevertheless disputed the Syrian regime’s responsibility for the chemical weapon attacks — despite evidence that included U.S. radar tracks showing the path of the Syrian aircraft that carried out the bombing and evidence from Turkey that victims suffered from exposure to lethal sarin gas. As of Friday afternoon, however, Russia had not canceled Tillerson’s trip to Moscow, scheduled for next week.

“I do think this signals the end of Trump’s game plan to try and get closer to Russia as a way to distance Moscow from Iran,” said Dimitri Simes, president of the Center for the National Interest in Washington, D.C. Moscow now knows it can expect very little in terms of cooperation from the Trump administration, he said. “And if the Trump administration continues to ratchet up the pressure on Russia in terms of Syria, Moscow may also try and extract a cost, such as supplying anti-aircraft missiles for the Taliban to use against U.S. aircraft in Afghanistan.”

With the Trump administration having dispatched more special operations forces and U.S. Marines to Syria to aid in the fight against the Islamic State militant group, and with U.S. warships having attacked a Syrian regime air base to enforce the red line against the use of chemical weapons, the United States is undoubtedly becoming more entangled in that six-year conflict. That poses the question of what the Trump administration plans to do next. Trump has already reportedly asked the Defense and State departments to produce a plan by the end of April, for instance, to establish “safe havens” in Syria that would be protected by U.S. airpower and mostly allied ground forces. That would represent another major footprint in what some experts believe is a potential Middle East quagmire. An even more frightening possibility is that Assad might use chemical weapons again, provoking another American reaction and touching off a cycle of escalation.

“I applaud Trump’s willingness to use military power to oppose those who are committing crimes against humanity in Syria, and I fully expect Secretary of State Tillerson will try and use that as leverage in talks with the Russians on how to end the conflict,” said retired Air Force Lt. Gen. David Deptula, who managed the air war in Afghanistan and commanded a “no-fly” operation over Iraq in the 1990s. “But when you talk about creating ‘safe zones,’ you have to be very careful in defining exactly who you intend to defend in this safe zone, and from whom. Because if you want air forces available to prevent the Syrian regime or ISIS from assaulting that safe zone 24 hours a day, 7 days a week, that will require enormous resources.”

Perhaps the most important question raised by the administration’s military action in Syria is what lessons a new and mercurial commander-in-chief gleans from the experience. The decision-making process was apparently driven by the military experts and pragmatists in the administration’s top ranks, most notably Tillerson, National Security Adviser Lt. Gen. H.R. McMaster and Secretary of Defense and former four-star general James Mattis.

“If the president compares this professionally executed operation with the disastrous rollout of the immigration ban handled by truculent and in-your-face ideologues like [White House chief strategist] Steve Bannon and his team, Trump should conclude that he’s best served by the experienced pragmatists. That really would represent an important pivot,” said Nicholas Burns, professor of diplomacy and international relations at Harvard’s Kennedy School of Government, and formerly the No. 3 official in the State Department. “My concern is that while Trump acted with conviction and decisiveness in this instance, his leadership style is also brash and impulsive. So this may be a double-edged sword in terms of what lessons he draws from the experience. If Trump acts brash and quickly decisive in dealing with a much more powerful foe like North Korea, it could be disastrous.”