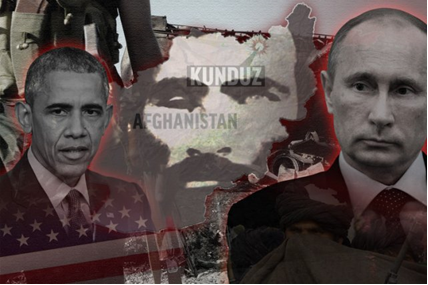 In an ‘enemy of my enemy’ calculation, experts see Putin poking the U.S. in the eye for over a year in Afghanistan

Secretary of State James Mattis and US Central Command chief General Joseph Votel have made headlines recently by publicly revealing for the first time that Russia has been arming Taliban insurgents in Afghanistan who are responsible for killing many US and Afghan troops. Readers of my blog “Prodigal Reporter: First Drafts,” and of my work for Yahoo News, have been aware of this unlikely, clandestine alliance between Moscow and Islamist insurgents for over a year. To learn how Russia is taking the long view in trying to undermine the United States worldwide, read the original article published February of 2016 by YAHOO NEWS under the headline: “US Officials: Russia Forges an Alliance with the Taliban.”

The Taliban’s capture of the Afghan city of Kunduz last September, 2015 was shocking. The insurgents’ first seizure of a major city in nearly 15 years of fighting suggested unexpected boldness on the part of new leader Mullah Akhtar Mansoor, and badly rattled the Afghan public’s faith in their U.S.-trained security forces. Just weeks after the Taliban offensive, Pres. Barack Obama publicly announced a dramatic slowing in the withdrawal of U.S. forces and new plans to keep at least 5,500 troops in Afghanistan into 2017, abandoning his hopes of bringing American troops home before leaving office.

For longtime Afghan analysts, perhaps the most surprising aspect of the Taliban offensive in Kunduz was its location. The Taliban are from the Pashtun tribe, and its traditional strongholds are in the south and east. Kunduz Province is a mixed-ethnic region near the northern border with Tajikistan that is made up primarily of Uzbeks, Tajiks, Hazaras, Turkmen, as well as some Pashtuns, and it is part of the home turf of the Taliban’s natural enemies in the former Northern Alliance. U.S. intelligence officials looking for answers to that puzzle have found evidence of the most shocking aspect of the Kunduz offensive by far — Russia’s training, arming and support of elements of the Afghan Taliban, Islamic extremists who in many cases were members or are descendants of Moscow’s erstwhile enemy, the Afghan mujahideen.

“With the Taliban intensifying their attacks and making advances in recent years, Russian intelligence has been reaching out to the group and renewing their contacts from the days in the 1980s when they worked with the Afghan communists,” said a knowledgeable U.S. intelligence official. When the Islamic State of Iraq and Syria (ISIS) emerged in Afghanistan last year, the Russians stepped up that outreach, alarmed that many of the ISIS fighters were Chechnyans recruited from Russia’s Caucasus region. While both ISIS and the Taliban subscribe to a ultraconservative interpretation of Islam, the Taliban remain focused on dominating locally in Afghanistan and view ISIS leaders and foreign fighters as intruders; ISIS, by contrast, has adopted al-Qaida’s ambitions of a global jihad against nonbelievers. “The Russians provided money and weapons to the Afghan Taliban to fight ISIS, and are providing training camps for the Taliban in Tajikistan, where Moscow retains a lot of influence,” said the U.S. official, who cited as evidence Taliban fighters brandishing new AK-47 rifles with synthetic stocks made only in Russia, as well as new Russian PK machine guns and rocket-propelled grenades (RPGs). “We’re one hundred percent sure that Russia is supporting certain elements of the Afghan Taliban, and we believe they are encouraging the group to operate along the northern border where they are easy to resupply from Tajikistan, and can act as a buffer against ISIS.” 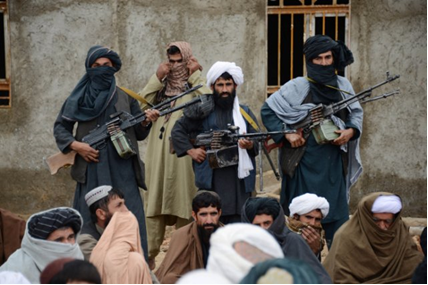 A de facto alliance between Russia and Islamist extremists who are fighting the United States and NATO in Afghanistan — and who are in many cases the sons of Afghan mujahedeen who the United States once armed and supported in their fight against the Soviet Army — is likely viewed as payback in the Kremlin. The long war and defeat of the Soviets in Afghanistan helped pave the way for the collapse of the Soviet Union, which Russian President Vladimir Putin once described as “a major geopolitical disaster of the century.” On December 31, 2015, Putin signed a new Russian national security strategy that for the first time unequivocally identifies NATO as a threat.

“The fact that Moscow has publicly identified NATO and the United States as its enemy in a strategic document represents a big shift in thinking, and what that means practically is more initiatives like Russia’s support for the Taliban, which I have on good authority is real,” said Dmitri Simes, a Russia expert and president of the Center for the National Interest in Washington, D.C. Russia will still cooperate with the United States if both countries interests align, he predicted, but the two antagonists are back to the kind of zero-sum mindset that prevailed during the Cold War.

“When the Russians can poke a stick in the eye of the United States and NATO and the costs aren’t perceived as too high, they will do so because, frankly, it makes them feel good,” Simes told Yahoo News. “From Moscow’s perspective, its support for the Taliban is no different than U.S. support for rebels fighting their close ally Bashar al-Assad in Syria, or arming and training Ukrainian troops who are fighting Russian-backed rebels in eastern Ukraine. If those are the rules the United States wants to go by, Russia is showing that they can play that game.”

A senior U.S. administration official contacted for this article said that the U.S. intelligence community is aware that Russia is concerned about the stability of Afghanistan, and reaching out to many players there, and that may include elements of the Taliban. In February 9 testimony before the Senate, Director of National Intelligence James Clapper referred obliquely to that Russian outreach. “Central Asian states remain concerned about the rising threat of extremism to the stability of their countries, particularly in light of a reduced Coalition presence in Afghanistan,” said Clapper. “Russia shares these concerns and is likely to use the threat of instability in Afghanistan to increase its involvement in Central Asian security affairs.”

By most accounts, the Russians began their outreach to the Taliban in earnest a few years ago, after the establishment of a 2016 deadline for NATO’s planned exit from Afghanistan and the hybrid terrorist insurgency making gains against Afghan security forces. The point man in the outreach is reportedly Russia’s special envoy to Afghanistan, Zamir Kabulov, a former KGB colleague of Putin who was the intelligence service’s top-ranking officer in Kabul during the Soviet Army’s 1980s war against the mujahideen. Zabuluv also negotiated with former Taliban leader Mullah Omar and his top lieutenants in the mid-1990s, after the group captured a Russian aircraft and took seven Russians hostage.

Russia’s contacts with the Taliban intensified last year after ISIS began making inroads in Afghanistan, and challenged the group for primacy among Afghan jihadists. The United Nations estimates that ISIS now has a presence in 25 out of Afghanistan’s 34 provinces, and U.S. commanders estimate that it has between 1,000 — 3,000 fighters in the country, many of them recruited from Taliban ranks after the group began splintering following last year’s announcement of the death of Mullah Omar. The international scope of ISIS is of great concern to Moscow, which estimates that some 2,400 extremists from the Caucasus have joined the uber-terrorist organization.

In January, Russian envoy to Afghanistan Kabulov conceded the unlikely alliance with Islamist extremists in remarks he made to the British newspaper The Independent. “Taliban interests objectively coincide with ours. Both the Afghan and Pakistani Taliban have said they don’t recognize ISIS. … That is very important,” he said, noting that ISIS is “undoubtedly” training militants from Russia in Afghanistan as part of its plans to expand into Central Asia. “We [thus] have communications channels with the Taliban to exchange information.”

The Russian-Taliban alliance reportedly moved well beyond just intelligence sharing last May, when a Taliban delegation visited the Tajikistan capital of Dushanbe. In exchange for releasing four Tajik border guards it had captured, the Taliban reportedly received a large cache of Russian weaponry. Such quid pro quo transactions are the basis for numerous tactical alliances in war-torn Afghanistan. The Daily Beast quoted a Taliban sub-commander in Kunduz who goes by the name of Qari Omar to the effect that “of course the weapons we got freshly from the Afghan-Tajik border played a key role in the fight for Kunduz.” 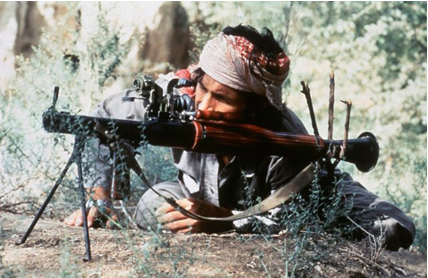 In the Gordian knot of political intrigue and double-dealing that is wartime Afghanistan, U.S. intelligence officials say Russia is also hedging its bets. A knowledgeable U.S. intelligence source reports that Moscow has reached out to senior generals in the Afghan security forces and regional Afghan governors, for instance, offering to also put them on its payroll. Last October, Afghan Vice President Abdul Rashid Dostum, an Uzbek warlord and longtime adversary of the Taliban, was warmly received in Moscow, where he also sought pledges of arms and money.

While reaching out to numerous and sometimes competing players in Afghanistan in hopes of gaining influence with an eventual winner, Russia also increasingly seems intent on pushing its newly declared “enemy” NATO away from its neighborhood. “I don’t buy the argument that Russia’s alliance with the Taliban is only driven by its concerns about ISIS,” said a former senior U.S. intelligence official with extensive experience in Afghanistan. “Moscow doesn’t want NATO and the United States anywhere near its southern border, nor a pro-American Afghan government in charge in Kabul, and they are thus finding common cause with the Taliban and others trying to push us and our allies from power. It’s classic Putin.”

With a war-weary United States and its NATO allies eyeing the exit doors in Afghanistan, and ISIS gaining a foothold, such “enemy of my enemy is my friend” calculations are sure to increase, accruing in many cases to the benefit of the Taliban. U.S. intelligence sources tell Yahoo News that Iran has also offered to support Taliban factions, an unusual development in that Sunni jihadi groups are often the sworn enemy of the Shiite mullahs of Tehran. Other strange-bedfellow alliances are likely to form as regional players jockey for advantage.

“We Americans are always naively looking for so-called moderates in white hats to support in these conflicts, but unless we want to keep 5,000 troops in Afghanistan for the next 5,000 years, we should also reach out to the people who are going to stick around,” said Milton Bearden, the former CIA station chief in Pakistan who was instrumental in arming the Afghan mujahideen against the Soviets in the 1980s. Having already been badly burnt in its decade-long occupation of Afghanistan, Moscow seems to have taken that lesson in proxy warfare to heart. “If I were sitting in the Kremlin and worried that ISIS is gaining strength near my soft underbelly of the Caucasus, I wouldn’t look to the United States and the Afghan army to take care of my problem. I’d probably reach out to the Taliban to help beat them back.”

James Kitfield has covered defense and foreign affairs issues from Washington, D.C. for over 25 years. His reporting from war zones in Iraq, Afghanistan and elsewhere has won numerous awards. His most recent book is “Twilight Warriors: The Soldiers, Spies and Special Agents Who Are Revolutionizing the American War of War” (Basic Books, 2016).