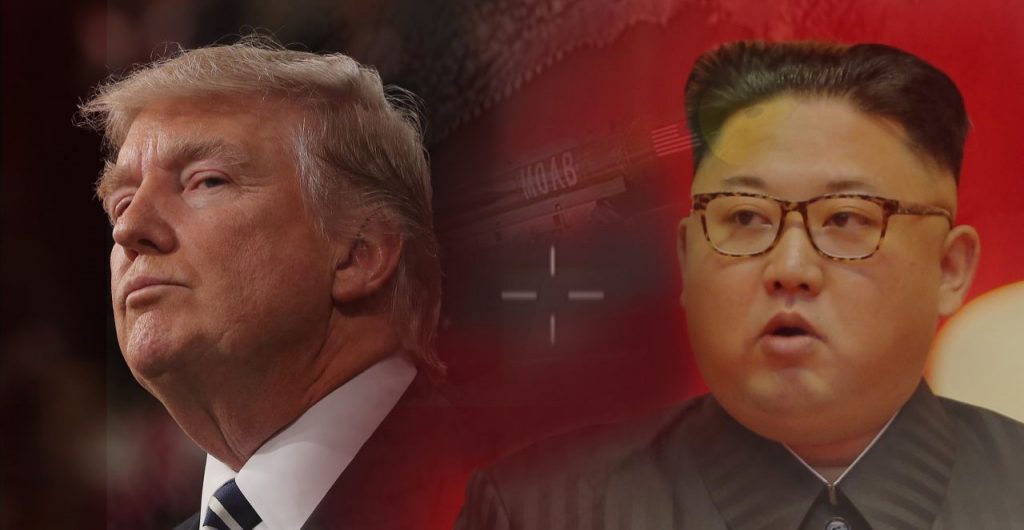 On the current rung of the escalation ladder, former Secretary of Defense William Perry believes the Trump administration has actually accomplished two important objectives: convincing the North Koreans that the U.S. is serious about possible military action, and convincing the Chinese that it is in their interest to find a way to defuse the crisis. “Those two preconditions present a rare opportunity for successful diplomacy with North Korea, if that is the Trump administration’s strategy,” he said. “But I don’t know if they even have a strategy.”

Nearly all U.S. presidents are tested early in their tenures, but the speed with which Donald Trump and his administration have climbed the escalation ladder toward a showdown with North Korea over its nuclear weapons has been dizzying.

A military confrontation with the heavily armed regime in Pyongyang would be frightening under any circumstances, but the dangers are multiplied by the personalities involved. As two untested and mercurial leaders face off, the world waits to see who will blink first.

It was just two months ago that President Trump and Japanese Prime Minister Shinzo Abe were dining at Mar-a-Lago when news came of a North Korean missile test, causing the president’s young national security team to scramble for a response before curious diners at the exclusive club. Roughly two weeks later, U.S. and South Korean forces began an annual military exercise that Pyongyang viewed as provocative. Five days later, North Korea launched four ballistic missiles simultaneously into the Sea of Japan, and the U.S. military announced the deployment of an advanced missile defense system to South Korea.

After intelligence reports recently suggested that North Korea is preparing for its sixth nuclear weapons test on April 15 to celebrate the 105th birthday anniversary of Kim Il Sung, the current leader’s grandfather, the Pentagon ordered the USS Carl Vinson carrier strike force to the Korean peninsula. “Multiple senior U.S. intelligence officials” then reportedly told NBC News that the administration is prepared to launch a preemptive military strike against North Korea if it follows through with the nuclear test.

As if to underscore that message, on April 14, the U.S. military for the first time dropped the largest conventional bomb in its inventory on an Islamic State cave complex in eastern Afghanistan. The 20,000-pound GBU-43/B Massive Ordnance Air Blast (MOAB) — nicknamed “the mother of all bombs” — was developed in the early 2000s to deter Iraqi dictator Saddam Hussein from developing his own weapons of mass destruction. That followed by a week the cruise missile strike on a Syrian airbase in response to Bashar Assad’s chemical weapons attack on a rebel-held city — an operation that coincided with Trump’s dinner with Chinese President Xi Jinping at Mar-a-Lago.

Any inference that the use of the MOAB was meant to send a signal to North Korean dictator Kim Jong Un is completely justified, according to a source knowledgeable of top Defense Department deliberations. The tactical goal was to kill ISIS fighters who had gained a foothold in eastern Afghanistan, he said, but it was also meant as a strategic shot across the bow of the North Korean regime. That message was apparently received loud and clear in Beijing, which has sent its top nuclear negotiator to North Korea, and according to intelligence site Stratfor, has suspended regular Air China flights to Pyongyang.

“I do think the Trump administration is using the Syrian missile strikes and dropping the MOAB to send a message to North Korea, especially because in the latter case using our biggest conventional bomb was operational overkill, and there were other smaller weapons that could have done the job,” said Ian Williams, associate director of the Missile Defense Project at the Center for Strategic and International Studies. The MOAB is so big it must be dropped out of the back of slow-moving cargo aircraft, he noted, so it has limited usefulness against North Korean targets guarded by a robust air- defense system. “But I think the administration was aiming for the psychological impact. There’s risk to that kind of pressure, though, because the more insecure the North Koreans feel about a preemptive strike that destroys their missile, nuclear or command-and-control capabilities, the more likely they might be to launch a preemptive strike of their own.”

This is not the first time that North Korea’s determination to acquire nuclear weapons that can threaten the United States and its allies has brought the two countries to the brink of war. In the summer of 1994, then Secretary of Defense William Perry was poised to implement “Op plan 5027,” which called for a preemptive strike using cruise missiles on the nuclear reactor at Yongbyon. The plan also called for reinforcements of U.S. forces in Korea, and the evacuation of American civilians from South Korea.

What most worried Perry then — and concerns him even more today — is that a preemptive U.S. strike could quickly escalate to an all-out war on the Korean Peninsula that the Pentagon has estimated would claim one million lives.

“The difference is back then this evil regime didn’t yet have a nuclear arsenal and today it does, and that poses a much greater danger,” Perry said in an interview. Pyongyang would almost certainly avoid using nuclear weapons preemptively because that would be suicidal, he said, but it’s likely to respond with conventional artillery buried in caves in the mountains along the demilitarized zone overlooking the South Korean capital of Seoul.

“A U.S. preemptive strike would likely involve cruise missiles such as the Trump administration launched in Syria, which was a relatively low-cost and successful operation. But unlike in Syria, North Korea is likely to respond militarily in a way that does terrible damage to South Korea, and might rapidly escalate to an all-out war that the North Koreans are bound to lose. A doomed North Korean regime about to be overthrown might then unleash nuclear Armageddon.”

On the current rung of the escalation ladder, however, Perry believes the Trump administration has actually accomplished two important objectives: convincing the North Koreans that the U.S. is serious about possible military action, and convincing the Chinese that it is in their interest to find a way to defuse the crisis. “Those two preconditions present a rare opportunity for successful diplomacy with North Korea, if that is the Trump administration’s strategy,” he said. “But I don’t know if they even have a strategy.”

Trump prides himself on not showing his hand in negotiating deals, a style that creates tensions and huge uncertainties when applied to geopolitics involving nuclear weapons. Greatly adding to the risk is an inexperienced young Korean dictator in Kim Jong Un, whose paranoia has already led him to murder a number of close aides and his own uncle and half brother. “I worry that Kim Jong Un is different from his father and grandfather, because he’s very inward looking and unpredictable, and apparently bent on constantly sending messages of his own invincibility,” said Bill Richardson, former New Mexico governor and U.S. ambassador to the United Nations, who has negotiated with the North Koreans on a number of occasions to win the release of Western hostages. Whether it’s murdering family members or ratcheting up the pace of nuclear weapons tests and missile launches, he said, the North Korean leader has exhibited an unrestrained streak of aggression. “I really do believe this is the most dangerous time I’ve ever witnessed on the Korean Peninsula.”