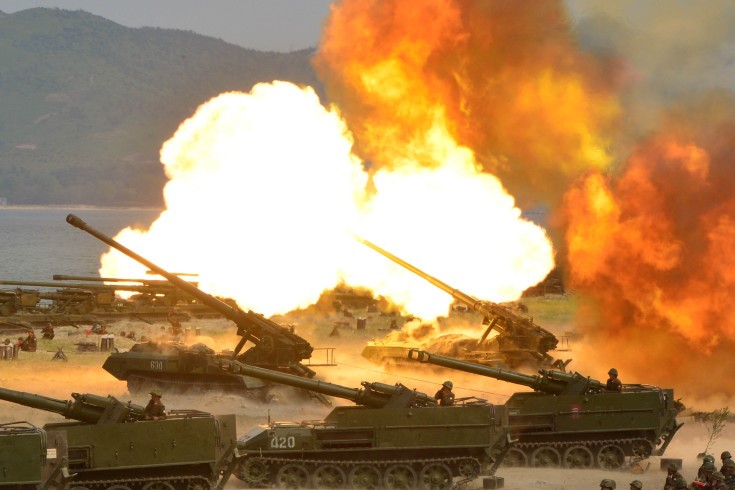 Tensions between the two countries are ratcheting up rapidly. Is there an off ramp on the road to war?

Crowds gathered Wednesday in Lafayette Park across from the White House, as a bullhorn blared warnings of nuclear Armageddon and anti-war protesters carried signs with mushroom clouds in front of gawking tourists. Beyond a cordon of police and secret service agents rose the ornate façade of the Old Executive Office Building, where the president and vice president of the United States along with virtually the entire U.S. Senate were present for a rare briefing on the escalating crisis with North Korea. The entire scene seemed like a Cold War flashback, a frozen relic from that bygone era suddenly reappearing to darken the councils of American leaders.

In laying out a range of economic, diplomatic and military options now being developed to try and rein in Pyongyang’s accelerating nuclear weapons and missile programs, President Donald Trump’s national security team did not reveal any dramatic new strategies to back up their warning that the “era of strategic patience is over.” That led some participants to speculate that the highly unusual invitation to transport the entire Senate to the White House complex in buses was pageantry designed to coincide with Trump’s “first one hundred days” benchmark this week.

Nevertheless the message delivered by Secretary of State Rex Tillerson, Secretary of Defense James Mattis, Chairman of the Joint Chiefs General Joseph Dunford, and Director of National Intelligence Dan Coats was consistent and deadly serious: on its current trajectory of testing and development North Korea will in a matter of months or a few years likely acquire a nuclear-tipped Intercontinental Ballistic Missile that can plausibly threaten the U.S. homeland, representing a “a grave threat.” An unnamed Republican senator captured the essence of the briefing when he told a Washington Post reporter that the Trump administration “wanted to prepare everybody for the fact that this could escalate quickly.”

The North Korea crisis has escalated plenty quick already. Just a few months ago Trump was dining at Mar-a-Lago with Japanese Prime Minister Shinzo Abe when North Korea launched a surprise missile test, causing the president’s young national security team to scramble for a response in front of curious diners. On March 6, North Korea launched four ballistic missiles into the Sea of Japan, and the U.S. military announced the deployment of an advanced missile defense system to South Korea that China vehemently opposes. A month later, Trump was dining with Chinese President Xi Jinping at Mar-a-Lago when the president announced a U.S. missile strike against Syria for its use of chemical weapons. As Kim Jong Un celebrated the 105th birthday anniversary of his grandfather on April 15 with a massive military parade, the Pentagon ordered the USS Carl Vinson carrier strike force to the Korean peninsula. Just last week Pyongyang conducted another, unsuccessful missile test even as the Trump administration sought to ratchet up pressure further.

A number of experts have been alarmed at the speed with which an inexperienced and mercurial President Trump, and a paranoid and bellicose Kim Jong Un, have climbed the escalation ladder towards a showdown. Trump has tweeted out redlines (“North Korea is looking for trouble. If China decides to help, that would be great. If not, we will solve the problem without them! U.S.A.”), even as Pyongyang keeps issuing threats (North Korea will “turn the US to ashes with a super-mighty preemptive strike”). One side will eventually have to blink, or else a devastating war on the Korean peninsula that possibly involves nuclear weapons becomes much more likely.

“I thought President Trump was right to order missile strikes against Syria for its use of chemical weapons, and he acted with a great deal of conviction and decisiveness,” said Nicholas Burns, the former number three at the State Department and director of the Future of Diplomacy Project at Harvard’s Kennedy School of Government. “But with Trump, that decisiveness could be a double-edged sword. As a leader he’s also brash and impulsive, and I hope he didn’t learn the wrong lesson from the Syrian strike. North Korea is a much stronger country, and it should dictate a much more measured and deliberate approach.”

The true wild card in this risky game of geopolitical poker remains the young, inexperienced tyrant Kim Jong Un, whose paranoia and determination to consolidate his rule has already led him to kill his own uncle and half-brother.

Bill Richardson is the former U.S. ambassador to the United Nations, and he has negotiated with North Korea on a number of occasions to win the release of American hostages, another of whom was arrested in Pyongyang just this past week. Whether it’s murdering his own family members or dramatically increasing the pace of nuclear weapons tests and missile launches, Richardson believes Kim Jong Un is even more aggressive than his forebears. “I do worry that Kim Jong Un is different from his father and grandfather, because he’s very inward looking and unpredictable, and apparently bent on constantly sending messages of his own invincibility,” Richardson said in an interview. “I really do believe this is the most dangerous time I’ve ever witnessed on the Korean Peninsula.”

One person who shares that concern is Graham Allison, director of the Harvard Kennedy School’s Belfour Center. In his forthcoming book, “Destined for War: Can America and China Escape Thucydides’ Trap,” Allison plumbs the lessons of history in arguing that a conflagration on the Korean Peninsula could draw the United States and China into a disastrous war. Sixteen times in the past 500 years a rising power like China has come to threaten a ruling or status quo power such as the United States, he notes, and in twelve of those instances war was the final outcome.

“War between the United States and China sounds crazy to a lot of people, but it seemed even crazier before the first Korean War [in 1950] when a much weaker China attacked an uncontested world superpower to drive U.S. soldiers out of North Korea and below the 38th parallel,” said Graham, speaking this week at the Center for the National Interest in Washington. “I believe China would go to war again if the alternative seemed to be a U.S. backed regime on its border with what is now North Korea.”

In all the historical crises and conflicts he studied for “Destined for War,” Allison believes the current crisis most resembles the 1963 Cuban Missile Crisis. Then as today, a U.S. president decided it was worth risking even nuclear war to keep an unpredictable adversary from acquiring the capability to threaten the U.S. homeland with nuclear missiles.

“President Trump has done everything to communicate that North Korea will not acquire the ability to threaten the U.S. homeland on his watch, and once all other options are exhausted and the generals say Pyongyang is on the verge of acquiring a nuclear ICBM, I believe Trump will attack,” said Graham. North Korea would likely respond by destroying much of Seoul with its conventional artillery, he said, precipitating a likely U.S. response that escalates to the Second Korean War. The Pentagon has estimated such a war could cost more than one million casualties.