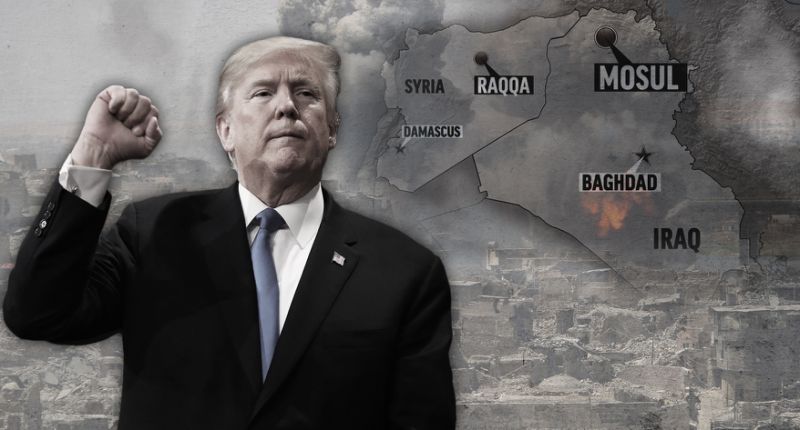 With the guns finally silent and the Islamic State of Iraq and Syria (ISIS) expelled from Mosul, Iraq, and Raqqa, Syria — the twin capitals of the group’s self-proclaimed caliphate — President Trump signaled victory in his State of the Union address. “Last year, I pledged that we would work with our allies to extinguish ISIS from the face of the earth,” Trump said on Jan. 30. “One year later, I’m proud to report that the coalition to defeat ISIS has liberated very close to 100 percent of the territory just recently held by these killers in Iraq and Syria.”

Recapturing ISIS-held territory after a campaign of more than three years was certainly an important inflection point in the United States’ post-9/11 wars against Islamist extremist groups, and cause for celebration. According to U.S. military officials, the offensive required some of the toughest urban combat since World War II and led to the deaths of an estimated 70,000-plus ISIS fighters, and 120 of the group’s leaders. The loss of territory roughly the size of Switzerland robs ISIS of its major sources of income and its air of invincibility. The collapse also greatly diminishes the power of ISIS leader Abu Bakr al-Baghdadi’s “Islamist homeland” narrative that drew an unprecedented 40,000-plus foreign fighters to the group’s black flag.

Perhaps most important, the concerns of U.S. counterterrorism officials that tens of thousands of those battle-hardened terrorists might return to their homelands to wreak havoc on a mass scale have not materialized. According to a recent report by Jane’s Terrorism and Insurgency Centre, with ISIS besieged in 2017 there was a global drop in terrorist attacks, with civilian deaths declining by 45 percent last year compared to the average of the previous five years.

“We assumed the foreign fighters that flowed out from the caliphate would roughly equal the numbers that joined ISIS, and we have rethought that analysis,” National Counterterrorism Center (NCTC) director Nicholas Rasmussen told Yahoo News in an exclusive interview in December, shortly before retiring. “We now think most of them will stay and fight and die in the caliphate. That’s good news.”

The U.S. military is already adjusting to the perceived defeat of ISIS in Iraq and Syria. U.S. Central Command recently announced that it is shifting U.S. military forces and resources from the Middle East to Afghanistan to break a military stalemate there with the Taliban Islamist extremist group. In January, Defense Secretary Jim Mattis released a new National Defense Strategy that downgrades the terrorism threat and prioritizes long-term strategic competitions with Russia and China instead. “We will continue to prosecute the campaign against terrorists, but great-power competition — not terrorism — is now the primary focus of U.S. national security,” Mattis said in explaining the change.

As the smoke has cleared and the dust settled over the rubble of Mosul and Raqqa, however, a number of veteran counterterrorism experts both inside and outside the government are experiencing an uneasy sense of déjà vu. They remember a similar inflection point in 2011, when news on the counterterrorism front was equally positive. That year U.S. counterterrorism forces killed both al-Qaida leader Osama bin Laden, and Anwar al-Awlaki, the charismatic, American-born imam and master propagandist who led al-Qaida in the Arabian Peninsula (AQAP). The nascent democratic revolutions of the 2011 Arab Spring offered a hopeful narrative of change that ran counter to bin Laden’s vision of Islamic theocracies imposed by violence and terror. At that time the Obama administration’s troop “surge” in Afghanistan had also reclaimed the initiative from the Taliban, and Iraq had sufficiently stabilized that President Barack Obama decided to withdraw all U.S. troops by the end of the year.

Just two years later, an ISIS terrorist group that President Obama described as the “JV,” or junior varsity, of terror rose from the ashes of a sectarian civil war in Syria, capturing roughly a third of Syrian and Iraqi territory, even as the Taliban began a resurgence in Afghanistan. The Obama administration was forced to send U.S. troops back to Iraq on a crisis footing, expand their operations into Syria and halt scheduled troop withdrawals from Afghanistan.

“Sectarian conflicts between Sunni and Shiite Muslims are being fanned by deep-pocketed states like (Sunni) Saudi Arabia and the Gulf States and (Shiite) Iran. So it is very premature to take any victory laps over the defeat of ISIS. The political conditions that gave rise to ISIS in the first place have actually spread.”

Peter Bergen, author of “The Longest War: The Enduring Conflict Between America and Al-Qaeda

“Optimism over the defeat of ISIS’s caliphate does feel a bit like 2011, and I was as guilty as anyone in thinking that the death of Osama bin Laden and the democratic Arab Spring revolutions was a hopeful inflection point,” said terrorism expert Peter Bergen, director of the International Security and Future of War program at the New America think tank, and author of The Longest War: The Enduring Conflict Between America and Al-Qaeda. “I didn’t anticipate that the Arab Spring would lead to civil wars that blew up Syria, Libya, Yemen and Iraq, leading to sectarian conflicts between Sunni and Shiite Muslims that are being fanned by deep-pocketed states like (Sunni) Saudi Arabia and the Gulf States and (Shiite) Iran. So it is very premature to take any victory laps over the defeat of ISIS. The political conditions that gave rise to ISIS in the first place have actually spread.”

U.S. counterterrorism officials have learned the hard way that it is a mistake to view terrorist groups like ISIS and al-Qaida in isolation. The hierarchal “core al-Qaida” that was driven into the Pakistani tribal areas after 9/11 may have been decimated by 2011, but by that time it had become a decentralized and geographically dispersed organization that survived by sharing resources, personnel and lessons learned with a far-flung network of affiliates that even today operates in 10 Muslim-majority countries and includes AQAP, al-Qaida in the Islamic Maghreb (AQIM) in North Africa, al-Qaida in Syria, al-Shabab (Somalia) and Boko Haram (Nigeria).

While it competed with core al-Qaida for predominance in the global jihadi movement, ISIS itself grew out of the remnants of al-Qaida in Iraq, at one time the most virulent and indiscriminately violent of the affiliates. All those groups are branches of the same ideological tree, united by the medieval Salafi theology that seeks to impose a strict and fundamentalist version of Islamic Sharia law on Muslim lands by force, and violently suppresses other religions and Islamic sects. 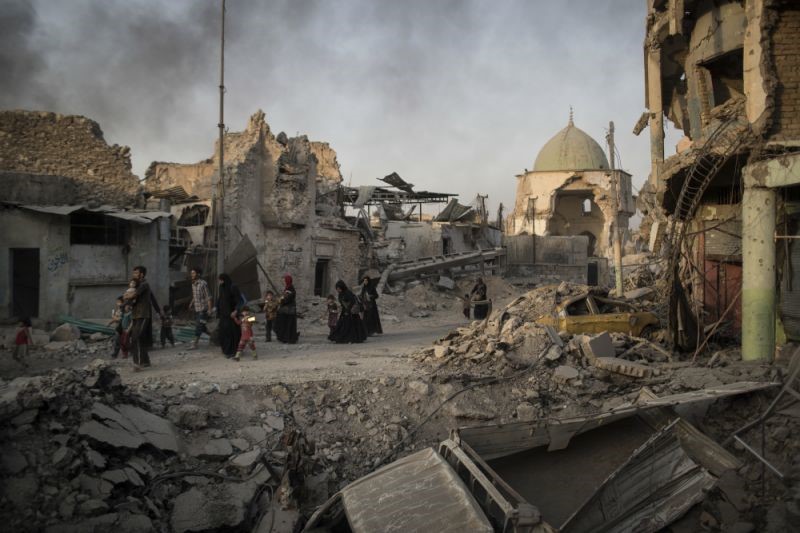 Destroyed shops in the Old City of Mosul, Iraq. (Photo:/AP)

All those groups have aggressively exploited conflicts involving vulnerable Sunni Muslim populations and have proved adept at attaching themselves to local insurgencies, whether it was core al-Qaida joining the Taliban insurgency in Afghanistan, AQAP and AQIM joining insurgencies in Yemen and Algeria, respectively, or al-Qaida in Iraq and Boko Haram instigating insurgencies of their own in the weak and conflicted states of Iraq and Nigeria.

That history suggests that the remnants of ISIS, possibly including al-Baghdadi, who is still at large, will seek to go underground and tap its loose networks of affiliates and supporters until it can rise from the ashes of the next sectarian civil war. The ISIS foreign fighters who did escape the collapsing caliphate could serve as a vanguard keeping the ISIS “brand” alive with periodic terrorist attacks. According to a recent report, “Beyond the Caliphate: Foreign Fighters and the Threat of Returnees,” by the Soufan Group and the Global Strategy Network, at least 5,600 ISIS foreign fighters from 33 countries have returned home, where their operational expertise and loose networks represent a long-term threat.

Bruce Hoffman is a longtime terrorism expert and author. “It was important to recapture ISIS’s caliphate, but Baghdadi has been planning for that eventuality for a long time, instructing new recruits and some leadership to travel to the 18 ISIS affiliates instead of coming to Iraq or Syria,” he said. The suicide bomber behind the 2017 terrorist attack in Manchester, England, that killed 22 people was trained by an ISIS cell in Libya, he noted, while the ISIS-linked cell behind the 2017 attack that killed 15 people and wounded more than 100 in Barcelona, Spain, was tied to other ISIS cells in Brussels and Morocco. 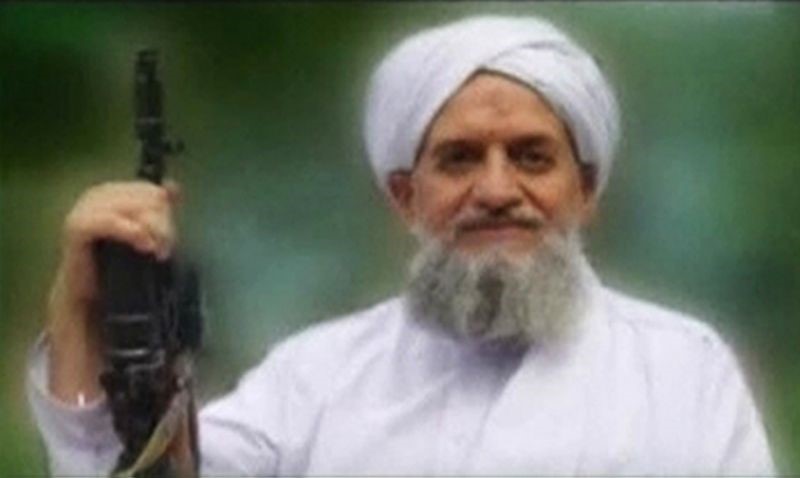 “We’re not talking about lone wolves plotting on their own in these cases, but rather cells connected to wider ISIS-linked networks of people with experience in explosives, and as we saw on 9/11 all it takes is a handful of terrorists to change the course of history,” said Hoffman. “Meanwhile, [al-Qaida leader Ayman] al-Zawahiri is reportedly communicating with his affiliates on a regular basis using encrypted communications, and he has reportedly dispersed his leadership to places like Lebanon, Turkey, Yemen and especially Syria, to include Osama bin Laden’s son Hamza bin Laden. So both ISIS and al-Qaida are patient groups, and they take the long view of this conflict.”

Indeed, a recent report by the Center for Naval Analysis concluded that al-Qaida is still pursuing its core goal of establishing a “global caliphate” by using terrorism and insurgency to attack “apostate” Muslim regimes (the “near enemy”) and the United States and the West (the “far enemy”). While the world has been focused on ISIS in recent years, it says, al-Qaida has been “grooming the next generation of its leadership and biding its time to regroup, regenerate and regain the mantle of global jihad.”

U.S. counterterrorism officials believe that much like al-Qaida before it, ISIS will transform into a more classic terrorist organizations that operates in the shadows and avoids the kinds of set-piece battles it lost in Mosul and Iraq, while plotting “asymmetric terrorist” attacks in the Middle East and around the globe to maintain its relevance in the terrorist pantheon. In the meantime, U.S. counterterrorism officials are tracking more threats from more places and individuals than at any other time in the past 16 years.

“That’s just the nature of a terrorist threat that continues to spread,” former NCTC director Rasmussen told Yahoo News. “The good news is that we don’t believe al-Qaida or ISIS is capable to the kind of large-scale, complex, mass-casualty attack on the U.S. homeland that we saw on 9/11. That threat has receded dramatically, but I’m afraid some version of this pathogen will be with us indefinitely.” If al-Qaida represented the 1.0 version of Islamist terrorism, he said, and ISIS the 2.0 model, then “there will certainly be a 3.0 version when some other group emerges that embraces this ideology. Speaking personally, I don’t believe the United States has the tools or capability to alter that dynamic on a global basis.”

James Kitfield is senior fellow at the Center for the Study of the Presidency & Congress, and author of the recent book “Twilight Warriors: The Soldiers, Spies and Special Agents Who Are Revolutionizing the American Way of War” (Basic Books).