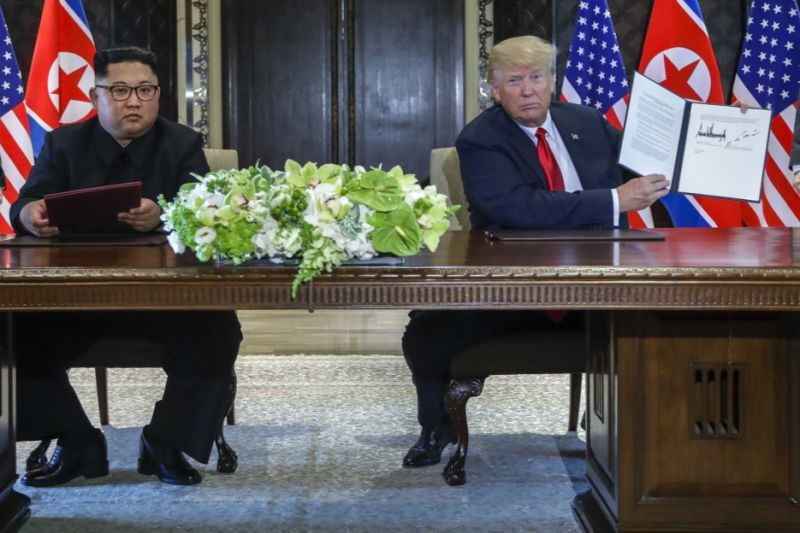 At  the recent press conference in Singapore following his meeting with North Korean leader Kim Jong Un, Donald Trump surprised America’s Asian allies, and his own Pentagon, by surrendering a major bargaining chip in the form of U.S.-South Korea military exercises.

“We will be stopping the war games, which will save us a tremendous amount of money, unless and until we see that the future negotiation is not going as it should,” Trump told reporters, referring to the annual exercises as “provocative.” “At some point, I have to be honest — I used to say this during my campaign … I want to get our soldiers [in South Korea] out. I want to bring our soldiers back home.”

As was the case when Trump fulfilled other controversial campaign pledges in the foreign policy arena — including scuttling the Trans Pacific Partnership trade agreement, the Paris Climate Accord and the Iran nuclear agreement  his comments sent shudders through the already shaky architecture of military alliances that undergird U.S. global power. Abandoning joint military exercises will immediately begin to degrade the readiness and deterrent posture of the 32,000 U.S. troops in South Korea, military experts say.

Retired Admiral Harry Harris, the former head of U.S. Pacific Command and the Trump administration’s chosen ambassador to South Korea, explained the logic behind the military exercises in Congressional testimony last year. “We are obliged to defend South Korea by treaty. They have a strong and capable military, as we do. But if we’re going to defend or if we’re going to fight with them on the peninsula then we have to be able to integrate with their military,” Harris told the House Armed Services Committee. “We have to maintain our degree of readiness, not only unilateral readiness, but also our combined and joint readiness with our brothers and sisters in the ROK [Republic of Korea] military.”

Equally surprising as Trump’s military announcement was the fact that he reportedly took this unilateral step without notifying South Korean and Japanese allies, or the Pentagon. The cancellation of the exercises has been a North Korean priority for decades, and in calling them “war games” and “provocative,” Trump adopted the rhetoric of Pyongyang.

“Trump says he’d like to pull U.S. troops out of Asia, which is a real heart-warming development for Beijing and Moscow, who want nothing more than to weaken and eventually unravel our alliances.”

Michael Greene, senior VP for Asia at the Center for Strategic and International Studies

“What’s really disconcerting is that Trump announced unilaterally to the leader of North Korea that the United States is going to stop military exercises with our allies, without first telling our allies or even the Pentagon. That’s astonishing,” said Michael Green, a senior vice president for Asia at the Center for Strategic and International Studies (CSIS), and a former senior director for Asia on the National Security Council. “Then Trump says he’d like to pull U.S. troops out of Asia, which is a real heart-warming development for Beijing and Moscow, who want nothing more than to weaken and eventually unravel our alliances. So this is a pretty stunning development.”

Before the summit Trump suggested that Kim’s two meetings with Chinese President Xi Jinping in the run-up to talks had hardened Pyongyang’s positions. Some China experts believe that Xi specifically asked Kim to bring up the military exercises as a major issue for discussion. Trump’s subsequent remarks about wanting to withdraw forward-deployed U.S. troops from Asia was a further boon to China’s strategic aspirations.

“Beijing was unhappy when Kim announced that he was unilaterally freezing his missile and nuclear weapons tests, and I believe the Chinese encouraged him to put the issue of also freezing the U.S.-ROK military exercises on the table in their discussions,” said Bonnie Glasser, director of the China Power Project at CSIS. “Certainly it was astonishing to hear President Trump talk about these exercises as ‘war games’ and ‘provocative,’ which is language taken right out of Pyongyang’s playbook. Trump’s message that he wants to pull U.S. troops out was just further music to China’s ears.”

Even in the unlikely event that North Korea actually surrenders its nuclear weapons, it will still possess large stockpiles of chemical and biological weapons, a 1.2 million man army, and enough conventional firepower to raze the South Korean capital of Seoul in the opening days of any conflict. Meanwhile, the U.S. — ROK deterrent posture against those formidable forces will continue to degrade as long as the freeze of joint exercises lasts, and will deteriorate even faster with continued talk of a withdrawal of U.S. troops.

Retired four-star General Barry McCaffrey is the former chief of U.S. Southern Command. “I believe it was entirely inappropriate for President Trump — who has no understanding of nuclear weapons and strategic alliances and was completely unprepared — to meet alone with the North Korean dictator without so much as a note taker present,” he told Yahoo News in an interview. “I’m very concerned that Trump signaled that if Kim gives up his nuclear weapons, then the United States will withdraw our troops from South Korea. Once you start that process it’s a one-way street of retreat from the Pacific Rim, which would leave our allies to confront a belligerent North Korea and an aggressive and massively armed China alone.”