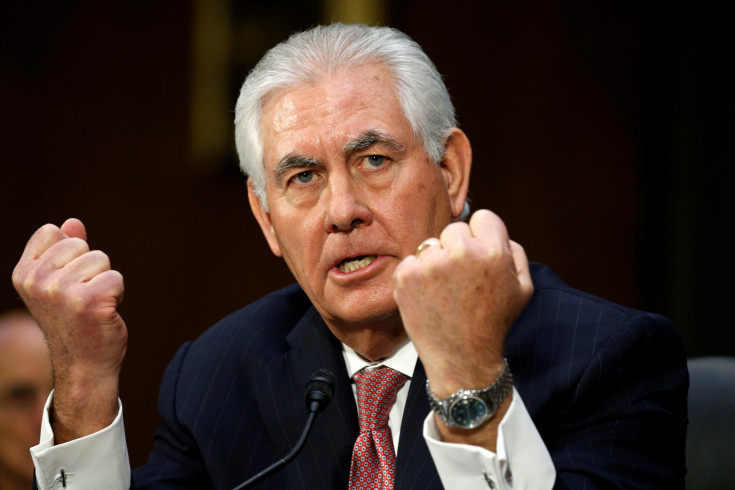 Unruffled by the periodic shouts of protesters, Secretary of State Designate Rex Tillerson weathered his confirmation hearing before the Senate Foreign Relations Committee on Wednesday mostly unscathed. The former ExxonMobil chief made the conservative case for more assertive U.S. leadership in the world, to include a firmer and more strategic engagement with Russia, increased pressure on China to reign in its client North Korea, and a priority focus on defeating the Islamic State terrorist group.

He also assuaged the concerns of some Democrats by embracing America’s “moral leadership” and pledging support for global human rights, and, unlike his boss, admitting the reality of climate change. The Eagle Scout and former head of the Boy Scouts of America also made a convincing case that he was eager to make the leap from the private to the public sector.

“I have no reservations about making a clean break from my private sector life. Now my love of country and patriotism dictate that I serve no one’s interests but those of the American people,” Tillerson told the committee. The past decade serving as the globe-trotting head of a multinational with business around the world, he said, had amounted to an “unintended listening tour” of rattled heads of state.

“I have heard their frustrations, fears and concerns about the withdrawal and stepping back of American leadership,” he said. “When I met with president-elect [Donald Trump], I indicated to him that we have been dealt some tough cards, but it’s no use whining about it. We just need to draw the aces out of that deck. And I believe we will be pushing on an open door, because [our allies] want American leadership.”

Given his past business ties to Russian oil oligarchs and President Vladimir Putin, who in 2013 awarded him the Order of Friendship, questions about Tillerson’s views on Russia naturally dominated the hearing. He was asked at length about Russian aggression, whether in interference in the recent U.S. presidential election; alleged recent war crimes in Syria; or the annexation of Crimea and subsequent invasion of Eastern Ukraine in 2014.

Unlike President-elect Trump, Tillerson was not conciliatory towards Putin. He expressed support for the Magnitsky Act, a bipartisan law passed in 2012 that has sanctioned 39 Russian officials for their role in the death of Russian anti-corruption lawyer Sergei Magnitsky, who died under suspicious circumstances in a Moscow prison. Putin has angrily denounced the Magnitsky Act. Tillerson also expressed support for the NATO alliance’s recent decision to deploy troops to Poland and the Baltic States as additional deterrence to Russian aggression.

Despite Trump’s hints during the campaign that he might recognize Russian annexation of Crimea and withdraw U.S. military support from Ukraine, Tillerson testified that he would have advised a much tougher response to Russia’s aggression.

“I would have recommended that we provide Ukraine defensive weapons,” he said, and that Ukraine deploy all of its military assets and put them on the eastern border with Russia, where the U.S. could have provided them with air surveillance to monitor Russian actions. “I think the Russian leadership would have understood that more powerful response and message that after Crimea, their aggression stops here… Instead, I think Russians judged our response to be weak.”

While Tillerson’s past business ties to Putin and other top Russian officials have alarmed some lawmakers, his nuanced understanding of the Russian mindset and personal connections have won him the backing of Republican and Democratic “wise men” worried about a precipitous decline in relations between the world’s preeminent nuclear weapons states. For instance, Republican Robert Gates, former CIA Director and Defense Secretary, and Democrat Sam Nunn, former Senator and Chairman of the Armed Services Committee, both spoke on Tillerson’s behalf at the beginning of the hearing.

“After joining the CIA 50 years ago, I spent my entire adult life dealing with Moscow,” said Gates, who during that time acquired a reputation for being a hard liner. “Yet I also knew that not only did we have to resist and contain the Soviet Union, we also had to contain the risk of a conflict with Moscow. That meant reaching agreements limiting nuclear weapons, and establishing procedures to prevent conflicts from arising between us. The [Trump administration] now has to thread the needle of pushing back against Russia’s bullying, and at the same time stop a dangerous downward spiral in U.S.-Russian relations. I believe Tillerson is the right person to accomplish both of those goals.”

Not everyone was sanguine, however, about Tillerson’s Russian connections. Sen. Ben Cardin D-Md., the ranking Democrat on the Foreign Relations Committee, could not win Tillerson’s backing for proposed legislation toughening sanctions on Russia for its meddling in the U.S. election. Sen. Marco Rubio, R-Fla., tried and repeatedly failed to get him to concede that Russia’s much publicized bombing of civilian targets in Syria made Vladimir Putin a war criminal. Rubio said he found Tillerson’s reticence on the issue “discouraging.”

Like Trump’s incoming national security advisor Lt. Gen. Mike Flynn, however, Tillerson obviously sees the defeat of the Islamic State terrorist group as a top U.S. national security priority, and perceives potential common ground with Russia in the global campaign against radical Islamic terrorism. He clearly believes that such cooperation could lead to “an open and frank dialogue with Russia regarding its ambitions,” the better to devise a U.S. strategy for dealing more effectively with Moscow.

“In my experience dealing with Russians I have found them very calculating, and very strategic in their thinking… and more than anything they want to reestablish Russia’s role in the global world order,” Tillerson testified. “They believe that after the breakup of the Soviet Union they were mistreated… So what we are witnessing now is Russia making the point that as a nuclear weapons power it still matters, and is a force to be reckoned with. They are forcing a conversation about Russia’s role in the global order.”

The conversation that Tillerson wants to have with his Russian counterparts, he said, will center on the question of whether Moscow forever wants to define itself as an adversary of the United States. “We’re not likely to ever be friends, because our value systems are starkly different,” he noted. “But from what I know of the Russian people there is [room] to define a different relationship that brings down the temperature [in our interactions]. As Secretary Gates and Senator Nunn said, dialogue is critical so that our differences and relationship don’t spin out of control.”

On a host of other foreign policy issues — including China’s illegal island building in the South China Sea; Iran’s alleged cheating on the international accord to contain its suspected nuclear weapons program; and the failure of allies to meet their commitments in terms of defense spending — Tillerson likewise called for a frank and painfully honest dialogue that holds all sides accountable. If that is the beginning of tough negotiations, then many Republican lawmakers, at least, clearly hope that Tillerman is the pragmatic dealmaker that President-elect Trump has promised.

“I understand that you never met Mr. Trump until a few weeks ago, but I believe that it is very possible that you are in fact an inspired choice for secretary of state,” said Robert “Bob” Corker Jr., R-Tn., chairman of the Senate Foreign Relations Committee. The president-elect approaches everything from an economic standpoint, Corker noted, because that has been his world.

“The fact that you led an economic enterprise that employed 75,000 people, and you have met and know world leaders up close and personal, may give our next president great confidence in your advice,” said Corker. “My sense is you will rise to the occasion and translate your experience into a foreign policy that benefits U.S. national interests.”