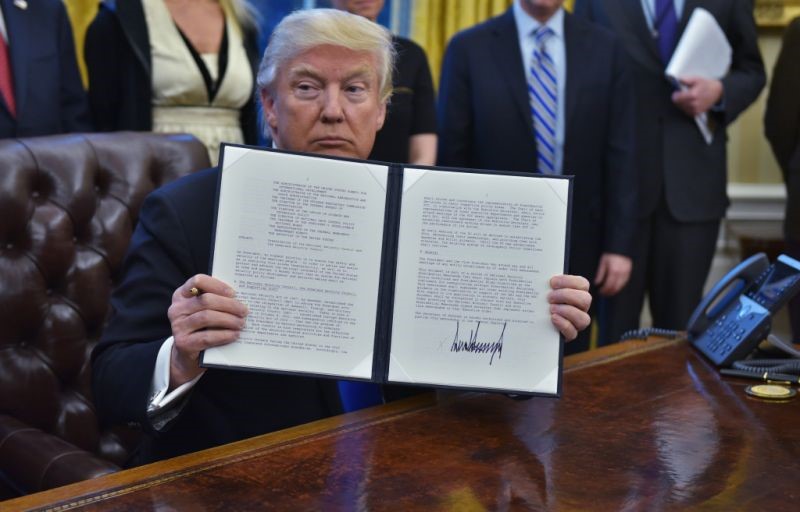 Dropping all his claims during the campaign that he had a secret and “foolproof” plan for defeating ISIS “quickly and effectively and having total victory,” Trump now faces what are likely to prove to be some of the most consequential decisions of his presidency

In his first speech to a joint session of Congress on Tuesday, President Donald Trump repeated his promise from the campaign trail to achieve a decisive victory over the Islamic State of Iraq and Syria (ISIS). Just the day before, Secretary of Defense Jim Mattis had briefed the president and his national security team on a list of options for accelerating the fight against the terrorist group.

“As promised, I directed the Department of Defense to develop a plan to demolish and destroy ISIS — a network of lawless savages that have slaughtered Muslims and Christians, and men, women and children of all faiths and beliefs,” Trump told Congress, in an unusually restrained and disciplined speech. “We will work with our allies, including our friends and allies in the Muslim world, to extinguish this vile enemy from our planet.”

Dropping all his claims during the campaign that he had a secret and “foolproof” plan for defeating ISIS “quickly and effectively and having total victory,” Trump now faces what are likely to prove to be some of the most important decisions of his presidency. Barack Obama similarly promised to decimate al-Qaida and fight the good fight in Afghanistan as a presidential candidate in 2008, for instance, only to come to recognize that those early decisions on the Afghan war were the most difficult and consequential of his presidency, reverberating throughout his entire eight years in office.

The nature of Trump’s anti-ISIS campaign could fundamentally recast U.S. alliances, with repercussions lasting years, and even decades. Trump’s military plan will also reveal the level of risk that an inexperienced and unpredictable president is willing to assume in order to keep a campaign promise that plays well with his political base and burnishes his strongman persona, yet entails life-and-death consequences. With the recent loss of Navy SEAL William “Ryan” Owens on a commando raid in Yemen, Trump has already felt the weighty burden of the commander-in-chief who sends service members on perilous missions, only to have some return in flag-draped coffins.

Most importantly, Trump’s anti-ISIS campaign plan will provide an early indication of whether he grasps the complexity of a threat that is not likely to yield decisive or easily sustained victories. Indeed, completing the ongoing military task of wresting Mosul and Raqqa from ISIS’ grasp is likely to be only the first, albeit important, phase in a long journey. The United States’ conflict with the global jihadist movement, now almost two decades old, is now officially Trump’s war.

Perhaps no military officer of his generation better understands this unconventional enemy, and the possible second- and third-order effects of every option now on Trump’s desk, than retired Gen. David Petraeus, the former top U.S. commander in both Iraq and Afghanistan and at U.S. Central Command. He is widely credited with crafting and executing the counterinsurgency doctrine that initially turned the tide in both those wars.

“With the Trump administration’s willingness to accelerate the ongoing campaign, I think there’s a real opportunity to capitalize on the momentum achieved and to hasten ISIS’s defeat in Iraq, Syria and elsewhere,” Petraeus said in an interview. He noted that in its waning months, the Obama administration had already taken several important steps on the military front: permitted U.S. military advisers to embed with Iraqi security forces as far down as the battalion level; eased rules on the use of air power; deployed more “advise and assist” elements to Iraq and then Syria; halted scheduled troop withdrawals in Afghanistan; and intensified counterterrorism operations in Libya, Somalia and Yemen as well. All of those actions have put increased pressure on a reeling ISIS and its allied extremist groups that the Trump campaign can capitalize on.

“But the military defeat of ISIS is only the first step,” Petraeus said. “The much more challenging task is to use all elements of American and coalition power to help achieve political solutions that will avoid once again creating fertile ground for extremists, and thereby avoid the rise of ISIS 3.0.”

And he added: “Our success in that mission will determine whether the U.S. military has to do this all over again in five years. And beyond that, we have to bear in mind that this is a generational struggle, and we have to conduct it in a way that is sustainable over the long term.”

According to a knowledgeable source, the anti-ISIS plan delivered to the White House fell far short of a formal campaign strategy endorsed by the secretary of Defense and Joint Chiefs. “I would call it less of a plan than a framework for considering a range of options designed to achieve desired end states, and the risks associated with those options,” said a senior Pentagon source. “The idea is to begin a discussion with the White House and eventually elicit guidance and decisions about where the commander-in-chief wants to go with the campaign.”

At a minimum, the Trump administration’s anti-ISIS campaign is likely to intensify and accelerate efforts already underway. Many experts expect the Pentagon to increase the numbers of the 5,000 U.S. troops currently deployed in Iraq, and the roughly 500 in Syria, who are primarily on train, assist and enable missions. Operational commander Lt. Gen. Stephen Townsend, who heads the Combined Joint Task Force – Operation Inherent Resolve, has already reportedly loosened rules on how close to shifting frontlines U.S. troops may operate, and liberalized “rules of engagement” for targeting ISIS forces in ways that potentially risk more collateral damage and civilian casualties. Those constraints will probably be further relaxed. U.S. military leaders have also floated the possibility of equipping Kurdish and Arab forces in Syria with tactical vehicles for added mobility, and heavier artillery to provide indirect fire, in anticipation of the upcoming siege of Raqqa, Syria.

Some airpower advocates argue that the U.S. military could significantly accelerate the anti-ISIS campaign by essentially “flooding the zone” with U.S. precision strike aircraft and unmanned surveillance and reconnaissance drones, the better to conduct round-the-clock strike operations. “The primary vulnerability of ISIS is that it really does have the attributes of a state, with leadership elements, banks, command-and-control and communications hubs, oil production and distribution networks, and electric grids,” said retired Air Force Lt. Gen. David Deptula, dean of the Mitchell Institute for Aerospace Studies, who commanded CENTCOM’s initial air war in Afghanistan. An aggressive air campaign that precisely attacks each of those nodes simultaneously, he said, could halt the ability of the Islamic State to function as an organization and a state. “Of course, at the same time, we have to try and minimize collateral damage and civilian casualties to the extent possible, but there is no such thing as immaculate warfare.”

Of course, the option that would most quickly recapture ISIS-held territory would be the deployment of U.S. ground combat units to lead the fight. CENTCOM commander General Joseph Votel seemed to leave that possibility open when he told reporters last week that in order to maintain momentum in the operation to liberate Raqqa, U.S. forces might “take on a larger burden ourselves.” There is still significant resistance to a full-scale U.S. ground operation, however, especially among a generation of U.S. military officers who came of age on the battlefields of Iraq and Afghanistan, and still vividly remember the monumental challenges of trying to piece together fractured societies.

“Clearly, President Trump finds the current pace of anti-ISIS operations unacceptable, but of all the military options the Pentagon has given him, deploying significant U.S. ground combat units carries the highest risks,” said retired Lt. Gen. David Barno, who commanded all U.S. and allied troops in Afghanistan, and is currently a distinguished practitioner in residence at American University’s School of International Service. U.S. ground combat troops, he notes, will greatly increase the likelihood of U.S. casualties, inviting an eventual public backlash at home. “Especially if U.S. troops are not going to stick around and protect the civilian population and help them rebuild, they will create a lot of anti-American sentiment. And even if they are there for the long-term, their mere presence will create a lot of insurgent antibodies in the region. We went down that road in Iraq and Afghanistan, and the initial results were impressive, and very short-lived.”

Indeed, many experts are most anxiously awaiting the Trump administration’s answers to the agonizing “day after” questions inherent in any military operation. The day after Mosul falls from ISIS’ grip, will Trump endorse an enduring U.S. military presence in Iraq to solidify those gains? How will he leverage that presence diplomatically in order to convince the Shiite-led government in Baghdad to reconcile with restive Sunni regions, and thus avoid rekindling the Sunni insurgency that gave rise to ISIS and its predecessor, al-Qaida in Iraq? Who will administer Raqqa the day after it falls into allied hands, and how will the Trump administration keep it from being swept into Syria’s hydra-headed civil war, with the Assad regime, Iran, Russia, Turkey Kurdish factions and other Islamic extremist groups all jockeying for position and territory? It is a recasting of the question that General Petraeus made famous in the early days of the Iraqi invasion: Tell me how this ends?

“Trump’s generals, like Mattis and [national security adviser Lt. Gen. H.R.] McMaster, understand better than anyone else that military operations are a necessary but not sufficient component of any successful counterinsurgency strategy, and I’m confident they are pushing hard for political, diplomatic and economic lines of effort,” said Kenneth Pollack, senior fellow in the Brookings Institution’s Center for Middle East Policy, and formerly a Middle East specialist at the CIA. “The question is whether they can convince Trump and his advisers to buy into and commit to such a plan. Because if the administration doesn’t get the politics of reconciliation right in Iraq, and come up with a plan to end the Syrian civil war, then it will confront the “son” of ISIS tomorrow, just as ISIS was the “son” of al-Qaida in Iraq.”