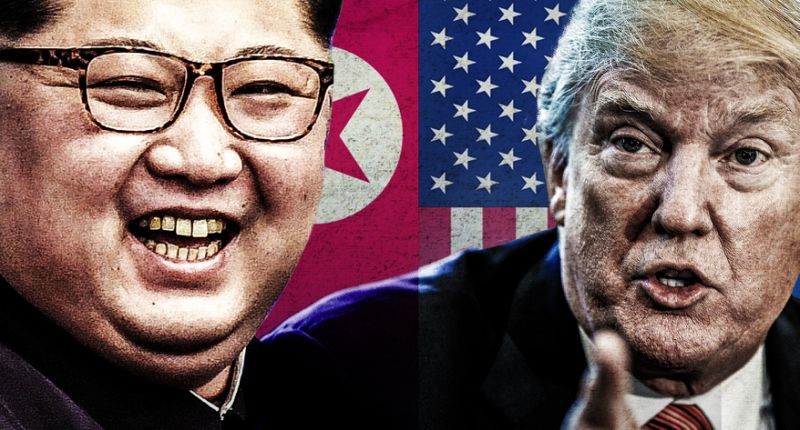 As the historic summit between President Trump and North Korean leader Kim Jong Un approaches, the question on many minds isn’t Will it be a success? but What would success even consist of? Perhaps the people best qualified to answer are former senators Sam Nunn, D-Ga., and Richard Lugar, R-Ind., who devised the Cooperative Threat Reduction Program in 1991 that successfully removed nuclear arms from the former Soviet republics of Belarus, Kazakhstan and Ukraine at the end of the Cold War. The two senators laid out their ideas in a Washington Post op-ed on April 24, and at the invitation of Vice President Mike Pence met with President Trump in the Oval Office last week to explain their program and how it could provide a framework for the talks in Singapore.

According to Lugar, the president seemed receptive.

“President Trump sat behind his desk and we had a good conversation, during which Sam and I argued that the Nunn-Lugar Cooperative Threat Reduction Program could provide a formula for a successful summit with North Korea,” Lugar told Yahoo News.

The key elements of the Nunn-Lugar program are reciprocity, concrete commitments by both sides and the designation of point persons by each side with the authority to drive the process forward. Nunn also stressed the need to set realistic expectations. He fears that Secretary of State Mike Pompeo’s stated goal of “rapid denuclearization, total and complete, that won’t be extended over time” is probably out of reach.

“I was concerned that some people in the Trump administration seemed to have a goal in their minds that the day after the summit a C-17 [airlifter] would fly out of North Korea carrying all of Pyongyang’s nuclear weapons,” Nunn said in an interview with Yahoo News. There is a real tension between lofty U.S. goals and what is realistically possible in the near- and mid-term, Nunn said, and between trying to rush everything versus establishing a phased approach of deliberate confidence-building measures. “That will ensure that neither we nor the North Koreans do anything that could lead to a catastrophic mistake that goes ‘boom’ and kills a lot of people,” Nunn added. “So I would describe a realistic process of denuclearization not as a Hail Mary pass to the end zone, but rather three yards and a cloud of dust in a game plan that bridges the gap between North Korea’s expectation of upfront relief from sanctions and the U.S. expectation of significant upfront progress towards denuclearization. We also need to avoid spiking the ball at the 50-yard line by ignoring North Korea’s chemical and biological weapons of mass destruction.”

In the run-up to the summit and what amounts to an act of high-wire nuclear diplomacy, the Trump administration has typically been all over the map in terms of its strategy. National security adviser John Bolton recently said the administration had “very much in mind the Libya model from 2003, 2004,” referring to the negotiations that led Libyan dictator Moammar Gadhafi to end his nuclear program. The obvious flaw, from Kim’s point of view, is that Gadhafi was left without much deterrence to interference when NATO backed a rebellion seven years later that overthrew his regime and executed him. North Korea’s fury at the Bolton comments led Trump to cancel the Singapore Summit two weeks ago, before reversing himself just days later.

As recently as last week, the impulsive Trump publicly downplayed the meticulous preparation that traditionally precedes summits where the existential issue of nuclear conflict hangs in the balance. “I don’t think I have to prepare very much,” Trump told reporters during a White House meeting with Japanese Prime Minister Shinzo Abe. “It’s about attitude, it’s about a willingness to get things done.”

Despite calls in some hard-line quarters for a rapid, complete and irreversible North Korean denuclearization before the U.S. grants any sanctions relief, a key lesson of the Cooperative Threat Reduction Program was the need to fashion an agreement that offers concessions from both sides. Some experts believe Kim Jong Un actually wants to make a dramatic gesture with a “big give,” for instance, perhaps the first ever declaration of his country’s nuclear arsenal and facilities. In the Nunn-Lugar template, the Trump administration should be prepared to reciprocate, possibly by offering to establish normal diplomatic relations and provide humanitarian and medical aid to combat a tuberculosis outbreak in the Hermit Kingdom.  According to World Health Organization figures, North Korea has one of the highest tuberculosis infection rates outside of sub-Saharan Africa, and WHO estimates that in 2014 5,000 North Koreas died of the disease, or a rate five times higher than its neighbor South Korea.

Both Nunn and Lugar believe a successful summit will produce a broad statement on agreed-upon goals, backed by concrete commitments to begin a phased, step-by-step process of identification, verification and dismantlement, where each step is carefully sequenced with incentives to build confidence for the next.

“I will judge the summit a success if both sides conclude that they will benefit from the outcome, and each side gives as well as it gets,” said Lugar, who said that, as with Nunn-Lugar, the driving principal should be U.S. willingness to pay for each step North Korea takes toward dismantlement. “I described to President Trump how Nunn-Lugar offers a detailed blueprint for how denuclearization is achieved, so the two leaders can focus on and negotiate the big issues. The next key step will be the beginning of implementation to see if we can sustain the momentum from the summit, recognizing it’s only the beginning of the long and tough work ahead of actually dismantling North Korea’s nuclear arsenal and weapons complex.”

Another sign of a successful summit would be the delegation by both Trump and Kim Jong Un of key lieutenants with the authority to drive the denuclearization process going forward. To date the most likely candidates are Secretary of State Pompeo, who has conducted the shuttle diplomacy to prepare for the summit, and North Korean intelligence chief Gen. Kim Yong Chol, Kim’s right-hand man who recently visited the White House to get the summit preparations back on track.

In turns of substance, look for indications that North Korea is willing to make a serious and complete declaration of its nuclear arsenal and weapons facilities. Given Pyongyang’s well-documented cheating on earlier agreements, even that first step would be unprecedented.

“That declaration of North Korea’s weapons inventory will be a top priority, but even there I don’t expect Kim’s delegation to come with a yellow pad listing everything in its nuclear, chemical and biological arsenal. There may not even be more than two or three people in North Korea who know the whole story, so it will take time to get a full accounting,” said Nunn. After that declaration, the next step will be establishing a verification regime that has United Nations and U.S. weapons inspectors, scientists and military officers working on the ground with their North Korean counterparts. The relationships that engagement nurtures will prove critical in preparing the ground for the laborious process of actually dismantling weapons. 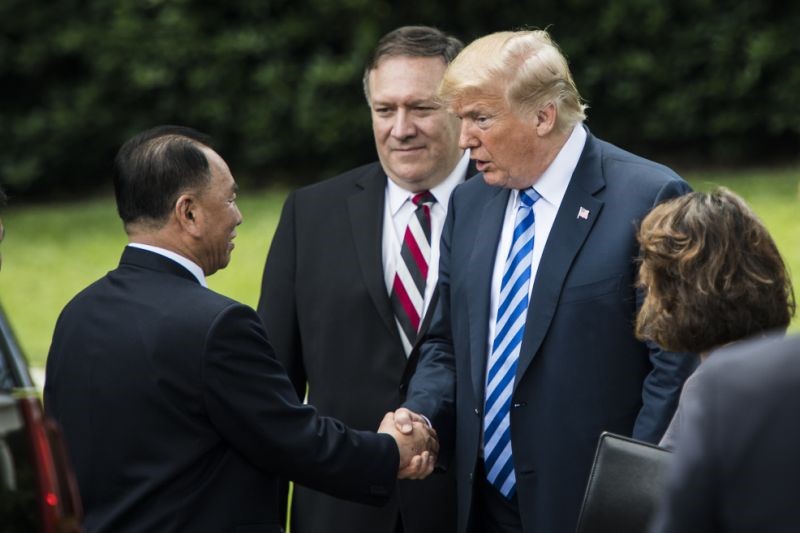 “One of the lessons of Nunn-Lugar was that the scientists and engineers who put these weapons together have to be the ones to take them apart, because there’s a lot of safety risks involved in removing uranium and plutonium from nuclear devices,” said Nunn. “Gainfully employing a lot of North Korean scientists is also important, because having a bunch of unemployed nuclear weapons experts is a proliferation threat.”

Given the complexity of the issues involved, Pyongyang’s failure to honor past agreements and Trump’s instincts for show and sizzle over substance, many nonproliferation experts believe the odds are stacked heavily against a summit that actually leads to a denuclearized Korean Peninsula. In that view, the summit will most likely end in a vague declaration of intent lacking specific commitments towards dismantlement. That could ease the “maximum pressure” campaign against North Korea without achieving the primary goal, and perhaps pave the way for a premature “peace treaty” that undercuts the logic for U.S. troops in South Korea.

“I think the odds are very long, and it’s highly unlikely that that we’ll get something from the summit that those of us who follow these issues would count as real denuclearization,” Michael Green, a former member of the National Security Council and senior vice president for Asia at the Center for Strategic and International Studies (CSIS), said in a recent podcast. “We’re much more likely to get very vague statements and declarations.”

Victor Cha is the former Asian affairs director on the National Security Council and the Korea chair at the Center for Strategic and International Studies. “President Trump has already said that we’re not exerting ‘maximum pressure’ anymore and that we’re not interested in the Libya model, so we have already lowered our negotiating objectives before the president has even walked into the room,” he said in the CSIS podcast. “I think that speaks to the fact that what is driving President Trump is the meeting itself, more than the actual objectives and deliverables from the summit. And that’s quite concerning.”

With recent bellicose rhetoric and nuclear and long-range missile tests driving North Korea and the United States toward the brink of a potentially catastrophic conflict, however, it would have been diplomatic malfeasance not to test the proposition that Kim Jong Un really does see it in his long-term interest to strike a deal. In the unlikely event that he is sincere, Nunn-Lugar offers the most successful template to date for actually achieving a win-win denuclearization.

“There is certainly no guarantee that there will be a diplomatic breakthrough, but we must be prepared to seize the opportunity,” Nunn and Lugar wrote in their recent op-ed. “Just as we should prepare for the summit to go wrong, we should also prepare for it to ‘go right.’”

James Kitfield is senior fellow at the Center for the Study of the Presidency & Congress and the author of the recent book “Twilight Warriors: The Soldiers, Spies and Special Agents Who Are Revolutionizing the American Way of War” (Basic Books).