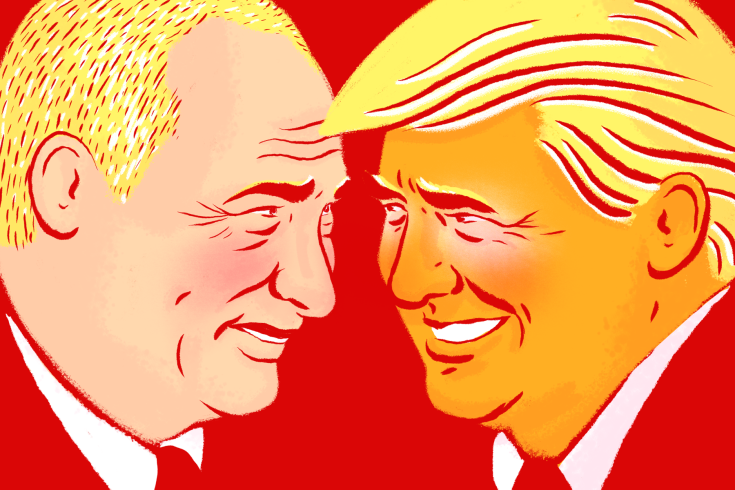 Among the countless tweets that appear like snowflakes each morning from the account of @realDonaldTrump, one late last December landed with a deafening thud. The reverberations from that seemingly innocuous, 140-characters-or-less message have now rocked the White House to its very core.

Just the day before the tweet in question, the Obama administration had announced sanctions on Russia for meddling in the U.S. election on behalf of the president-elect, including the expulsion of 35 Russian diplomats. Rather than retaliate in kind with the expulsion of U.S. diplomats from Moscow as well-rehearsed protocol practically demanded, President Vladimir Putin did nothing. He apparently expected more sympathetic treatment from the incoming Trump administration, and a new president who had nothing but praise for the Russian strongman during the long presidential campaign.

“Great move on delay (by V. Putin),” Trump crowed on Twitter. “I always knew he was very smart!”

Obama administration officials were immediately suspicious. The FBI confirmed that around the same time, Lt. Gen. Michael Flynn, Trump’s designated national security adviser, had talked by phone with Russian ambassador Sergey Kislyak, whose line is routinely monitored by the bureau. While no “quid pro quo” deal was discussed, the FBI officials reportedly confirmed that the topic of the sanctions and diplomatic expulsions came up. The conversation conceivably violated the obscure and rarely enforced Logan Act, a two-centuries-old law barring private citizens from negotiating with foreign powers in disputes with the United States.

The suspicions raised by that phone call, and Flynn’s initial denials that sanctions were ever discussed, led to his resignation as national security adviser earlier this week after just 24 days on the job. The blossoming scandal has spread chaos in a White House already reeling from controversies on numerous fronts. The issue of Trump and his inner circle’s murky ties to Russia are the subject of intensifying investigations by the FBI and Senate Select Committee on Intelligence, and Senate Democrats are now pressing for a special investigation by a more independent select committee. Already Watergate-era questions are being asked that should alarm any White House, let alone one only a month into the chief executive’s tenure: What did the president know, and when did he know it?

“I don’t think there is anything particularly controversial, let alone incriminating, for the incoming national security adviser to reach out to the Russian ambassador and have a general discussion about sanctions that might impact the president-elect’s stated goal of improving the relationship,” said Dmitri Simes, president of the Center for the National Interest in Washington, D.C. “The serious failure of judgement came when Mr. Flynn, who should have known that his discussion with the Russian ambassador was probably monitored, nevertheless assured [Vice President Mike] Pence that sanctions were not discussed on the phone call just before Pence went on the Sunday talk shows to publicly repeat the falsehood. That is reminiscent of Watergate, where the issue quickly becomes not what the president or national security adviser originally did, but rather this junior league cover-up.”

While a recalibration of the U.S.-Russian relationship is strategically sound, Trump and his inner circle have been tone deaf to the concerns created by their comments, actions and murky ties to Russia. Last summer former Trump campaign chairman Paul Manafort resigned, for instance, after reports surfaced of his ties to Russian and Ukrainian oligarchs, some allied with Putin. Early Trump foreign policy adviser and businessman Carter Page likewise has close ties to Russia, and criticized U.S. pro-democracy and anti-corruption efforts there as “hypocritical.” Flynn himself has been criticized for accepting an invitation by the Kremlin-controlled RT television network to speak in Moscow, and for sitting next to Putin at a banquet. This week the New York Times reported that all three men, along with longtime Trump adviser and confidant Roger Stone, are being investigated by the FBI about their ties to Russia. All have strongly denied having any improper contact with Russian officials.

Given President Trump’s aggressive counterpunching at the slightest hint of criticism, his persistent praise of Putin has likewise raised suspicions. Even after it became increasingly clear during the campaign that Russian intelligence had hacked Democratic Party communications during the campaign and was leaking the information, Trump publicly requested that Russia find and release Hillary Clinton’s emails (supposedly as a “joke”). When the U.S. intelligence community reached the consensus conclusion that Russian intelligence had interfered in the election in order to favor Trump’s candidacy, his transition team issued a statement belittling their competence. “These are the same people that said Saddam Hussein had weapons of mass destruction.” When the summary of a British opposition researcher’s unverified dossier on Trump’s alleged activities in Russia was included in an Intelligence Community brief and subsequently leaked, Trump blamed U.S. intelligence agencies and compared them to Nazis.

Trump has also stubbornly refused to release his tax returns to quell suspicions about his potential financial dealings with Russia, despite Donald Trump Jr. having told an investor conference in 2008 that “Russians make up a pretty disproportionate cross-section of a lot of our assets. We see a lot of money pouring in from Russia.”

That atmosphere of suspicion, official investigation and seething anger among some intelligence officials was the backdrop of the fateful phone between national security adviser Flynn and the Russian ambassador in late December, right after the Obama administration imposed sanctions and expelled Russian diplomats as punishment for Moscow’s meddling in the election.

“I don’t think there’s a chance that General Flynn was freelancing without the knowledge of the president when he made that phone call, and they both probably thought they were doing what’s in the best interests of the American people by trying to begin a new relationship with Russia,” said retired General Barry McCaffrey, the former 4-star commander of Southern Command. “Someone probably explained the Logan Act to Flynn at some point, and that led him to lie about the nature of the call. That’s when things got crazy.”

Indeed, it was Vice President Mike Pence’s categorical denial that Flynn and the Russian Ambassador had discussed sanctions on the call, made on a January 15 appearance on CBS’s “Face the Nation,” that reportedly alarmed FBI officials and acting Attorney General Sally Yates. They believed such a discrepancy between the actual transcript of the conversation, and the public statements of the vice president, opened Flynn to possible blackmail. Certainly Russian officials knew the true nature of the call, and how it might embarrass the national security adviser. After an FBI agent interviewed Flynn, Yates informed White House counsel Donald McGahn II on January 26 that Flynn was potentially compromised.

The questions now swirling around the controversy include what did President Trump know about the full nature of the phone call discussing sanctions, and when did he know it? Why did the White House counsel’s office and Trump’s inner circle wait almost two weeks – just before the Washington Post was poised to break the story based on leaks describing the transcripts of the phone call – before informing Vice President Pence that he had inadvertently lied to the public?

The irony is that the true transgression at the heart of the scandal – running afoul of the ambiguous and probably unenforceable Logan Act – was a relatively minor and defensible act. There is a tradition involved in presidential transitions, however, which holds that incoming administrations should show heroic restraint until after Inauguration Day. In its eagerness to upend traditions and push boundaries, the Trump administration thus stumbled badly out of the starting gate.

“The Logan Act has been on the books for a very long time and to my knowledge it’s never been enforced, so there’s a reasonable question of whether it is even possible to enforce it,” said Ben Wittes, a senior fellow in Governance Studies at the Brookings Institution, and editor-in-chief of the Lawfare blog. “Having said that, there’s an important principle in this country that we only have one president at a time. Reaching out to the Russians and at least implying that Trump might undo the Obama administration sanctions, and then lying about it, broke that principle in a pretty flamboyant way.”

You can find the article on the Vocativ website here: