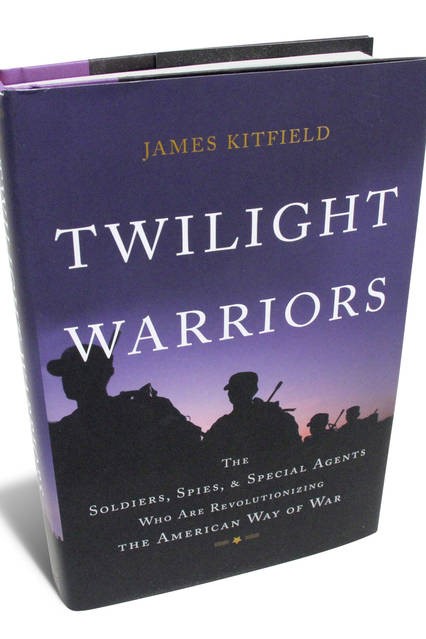 In its review of Twilight Warriors: The Soldiers, Spies and Special Agents Who Are Revolutionizing the American Way of War, (Basic Books, 2016) the Wall Street Journal notes, “Mr. Kitfield, a veteran national-security reporter whose earlier book, Prodigal Soldiers (1997), deftly narrated the U.S. military’s revitalization after Vietnam, here provides an enlightening tour of 21st-century counter-terrorism—its successes and failures, its evolving technologies, and its ever-festering rivalries among national-security agencies.”

The Naval Institute’s Proceedings review concluded, “In sum, Kitfield’s excellent book is strongly recommended for both military and civilian audiences. The key insight is that despite the changing face of conflict, war is disproportionately influenced by small groups of human beings.
In the past generation, the United States has been blessed by a talented and professional few who are truly a “band of brothers.” This book chronicles their dedication, leadership, and sacrifice and should not be ignored.”

According to General Dennis Reimer (ret), the 33rd Army Chief of Staff, “Twilight Warriors is undoubtedly one of the best books I have ever read. A brilliantly written narrative and real-world adventure that draws the reader in and vividly explains how a group of dedicated professionals helped keep our country safe after the 9/11 terrorist attacks. We can take inspiration from this wartime fraternity of twilight warriors who, when confronted with unprecedented challenges, operated on the principle of doing what needed to be done, and asking for permission and forgiveness later.”

General Barry McCaffrey (ret.), a former 4-star commander and one of the most decorated U.S. combat veterans of the past half century, said “Twilight Warriors is bar none the best work yet published on the global struggle against terrorism. James Kitfield’s riveting narrative reflects fifteen years of insider reporting on the soldiers, spies and special agents who have fought to keep the nation safe, and changed the way America fights. Twilight Warriors is breathtaking in its insights and revelations on our bitter, ongoing war on counter-terrorism. Kitfield has hit a home run.”

Peter Bergen, author of United States of Jihad and a top CNN counter-terrorism commentator, said “James Kitfield is one of the United States’ leading national security reporters. In Twilight Warriors he profiles the key players, and delivers a deeply reported and well-calibrated account of the shadowy conflicts that have defined America’s post-9/11 wars.”

Counter-terrorism expert and author Bruce Hoffman, director of Georgetown University’s Center for Security Studies, notes that “Twilight Warriors provides a uniquely intimate and timely window into the special operations, intelligence, and law enforcement counter-terrorism efforts of the past two decades. Compelling and insightful, it is the most up-to-date account available of the ongoing war on terrorism. James Kitfield’s gripping portraits of the key figures leading this struggle makes this book required reading for anyone wishing to understand the threat that terrorism continues to pose – and what we are doing to defeat it.”

Mark Thompson, Pulitzer-prize winning TIME Magazine national security correspondent, said that “In his book ‘Prodigal Soldiers,’ James Kitfield masterfully told the tale of how the post-Vietnam generation of officers rebuilt the U.S. military and marched to victory in the Persian Gulf War. Now with the insightful ‘Twilight Warriors,’ he tells the story of the next generation of American warriors as they confront the challenges of the 21st-century, battling ISIS, Al Qaeda, the Taliban and other shadowy groups that are determined to take the fight to our own shores, and pose the deadliest threat to the civilized world.”