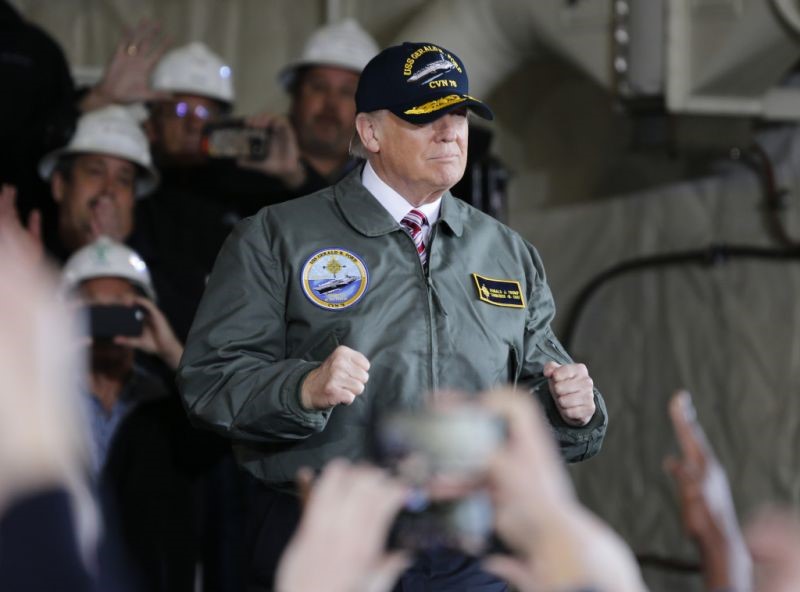 In the most iconic moment of his young presidency, Donald Trump stood on the deck of the Navy’s newest aircraft carrier in early March resplendent in a flight jacket and Navy cap. In a speech on the hangar deck of the USS Gerald R. Ford that recalled his political idol Ronald Reagan’s vision of “peace through military strength,” President Trump promised the assembled sailors that he would restore America’s unrivaled military might.

“On Tuesday, in my address to a joint session of Congress, I asked Congress to eliminate the defense sequester and to support my request for a great rebuilding of the United States military and the United States Navy,” Trump said to loud applause. “After years of endless budget cuts that have impaired our defenses, I am calling for one of the largest defense-spending increases in history!”

Call it a moment of “magical thinking,” conjured from a past where presidents in their first 100 days sailed with the winds of the recent election still at their backs, and possessed the political capital and experience to forge bipartisan consensus for big deals. The prospect of an actual Trump defense buildup began to disappear as soon as his budget director Mick Mulvaney, a deficit hawk and Tea Party alumnus, proposed paying for the defense increases with commensurate reductions in non-defense programs favored by Democrats and moderate Republicans, including draconian cuts of roughly 30 percent to the budgets of the State Department and Environmental Protection Agency, and the elimination of federal funding for a host of popular social programs such as Meals on Wheels. Even prominent Republicans like Sen. Lindsey Graham, R-S.C., correctly noted that budget was “dead on arrival” on Capitol Hill.

Hopes that Trump would fulfill his campaign promise to rescue an over-stressed Pentagon were further dampened by the administration’s unsuccessful attempt to repeal Obamacare. For five years, politicians in Washington have fought budgetary trench warfare along similar battle lines. The result has been multiple government shut-downs, a narrowly averted default on the national debt and the automatic triggering of across the board “sequestration” spending caps imposed by the 2011 Budget Control Act (BCA). The same forces are already gathering for another battle royale on April 28, when the administration and Congress will have to pass a $1 trillion catchall spending bill or a “continuing resolution” to keep the government running. Or not.

When Trump asked Congress specifically to eliminate the “defense sequester” in order to implement his defense spending increases, he correctly identified the 2011 Budget Control Act as the major impediment. The arithmetic involved is simple yet challenging. As established law, the BCA can only be repealed by a majority in the House and a supermajority of 60 votes in the U.S. Senate to overcome a likely filibuster by Democrats. To achieve repeal, the Trump administration must thus hold a fractious Republican majority together in the House and attract the support of at least eight Senate Democrats. Failure would risk the entire Trump agenda including not only a defense buildup, but also a $1 trillion infrastructure program and possibly a once-in-a-generation tax overhaul.

“The debacle of the Trump administration and Congressional Republicans failing to repeal Obamacare showed that it will be very hard for the Trump administration to hold together the hardline and more establishment factions in the House,” said Katherine Blakeley, a research fellow at the Center for Strategic and Budgetary Assessments (CSBA). Secondly, it also showed that Republicans and Democrats in the Senate are still in no mood to compromise. “And I’ve seen no legislative strategy coming from the White House to overcome those obstacles and move their agenda.”

To understand the leverage Senate Democrats in particular now have over the Trump agenda, consider that the Budget Control Act was itself born of partisan dysfunction, and the self-inflicted crises it continually creates in governing. The hardline Tea Party vanguard that helped Republicans capture the House in 2010 steadfastly refused to raise the U.S. debt ceiling in the summer of 2011 unless the Obama administration found commensurate budget cuts of $1.5 trillion over the next ten years. They also took tax increases off the negotiating table.

Facing the very real prospect of a disastrous sovereign debt default, Obama’s budget director Jack Lew came up with the idea for the BCA. The legislation empowered a “super committee” of six Republicans and six Democrats to find the required budget cuts by November of that year, but stipulated that if it deadlocked automatic across-the-board spending caps would be triggered that cut equally into defense and non-defense discretionary spending.

In a sign of the paralyzing partisanship to come, the bipartisan super committee failed, and the automatic “sequester” spending caps have been invoked for five years running. House and Senate budget negotiators have reached side deals to provide some “sequester relief,” but always with the modest extra spending split evenly between defense and non-defense spending, firmly enshrining the concept of “parity” between the two in any budget negotiation.

Republican defense hawks rightfully point out that “parity” holds the Pentagon hostage to domestic programs, but that was the essence of the perverse deal struck in the Budget Control Act, which was purposely designed as so onerous and haphazard that neither side would ever actually trigger sequestration. “With the BCA both Republicans and Democrats effectively took the Defense Department hostage,” Blakeley said. “The problem is that if both sides take the same hostage and are willing to shoot it year after year, they haven’t chosen a very good hostage.” 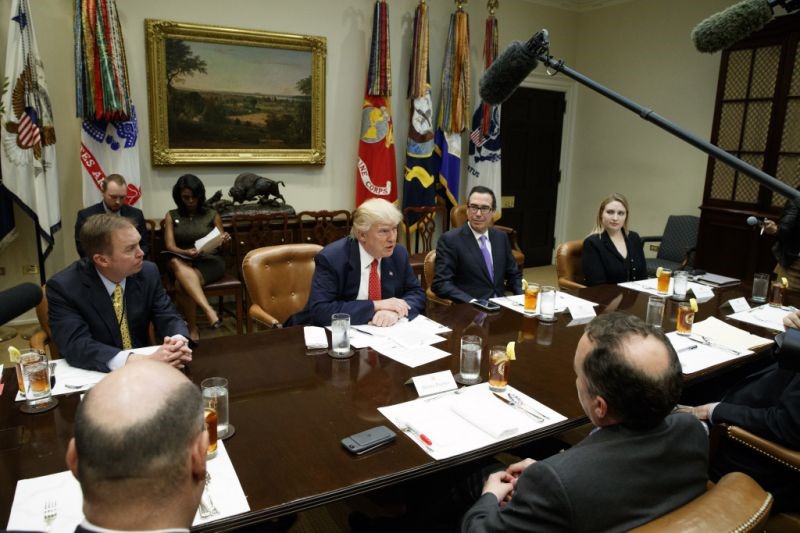 That is the zero-sum game that Trump has now dealt into, and why his opening bid of $54 billion in defense spending increases to be paid for by $54 billion in cuts to programs favored by Democrats and moderate Republicans is not considered serious. The irony is that Mick Mulvaney and his fellow Tea Partiers signed onto the BCA as a way to block Obama’s agenda, and Democrats are now poised to use it for the same purpose in thwarting Trump.

“Trump and a number of Republicans have engaged in a lot of optimistic talk about ‘repealing sequester’ and moving beyond the BCA, but I don’t see any realistic path to accomplish that goal,” said Todd Harrison, director of Defense Budget Analysis at the Center for Strategic and International Studies in Washington. The most realistic option if Trump was serious about a defense buildup and major infrastructure program, he said, would be to go around the hardline budget hawks in the House Freedom Caucus and Congressional leadership, and try to find a compromise deal with more moderate Republicans and Democrats that traded off between those priorities. “But I have seen no indications that the Trump administration is inclined in that direction, which means that pretty soon their whole agenda is going to run up against a roadblock called the Budget Control Act.”

Despite the fact that President Trump has yet to even cross his “first 100 days” threshold, the already depleted well of goodwill in Washington may have run too low for such a bipartisan deal. Along with a series of outlandish claims centered on the election, Trump has continued to infuriate Democrats by claiming without evidence that President Obama illegally wiretapped his communications, by making a priority and a debacle out of trying to repeal Obamacare and by name-calling opponents in both parties. This week, Senate Majority Leader Mitch McConnell, R-Ky., may trigger the “nuclear option” to win confirmation to the Supreme Court of Trump’s pick, Judge Neil Gorsuch, on a simple majority vote, breaking long Senate tradition and further poisoning the well. Meanwhile, with a historically low 35 percent approval rating in a recent Gallup poll, Trump has so far proven unable to unite his own fractious Republican caucus.

All of which means that a U.S. military that really is facing readiness and modernization crises — largely as a result of the stresses caused by fifteen years of combat combined with the havoc wrecked by five years of “sequester” cuts and budget uncertainty — can expect more of the same for the foreseeable future.

“With all of candidate Trump’s rhetoric about coming to the rescue of the Pentagon I hoped there was a real commitment, but his budget will provoke the same political paralysis we’ve seen for five years,” said Thomas Donnelly, a defense analyst and resident fellow at the conservative American Enterprise Institute. Democrats will continue to prioritize protecting entitlement and social programs, he said, while Republicans focus on tax cuts and deficit reduction. “And nobody will take care of the U.S. military, including President Trump, who doesn’t appear to have the attention span or the political capital to change that sorry dynamic.”